Fairytale Castles in Asia You Absolutely Have To Visit

It might be easy to think of castles as being found only in Europe. It is understandable— after all, these edifices were built during the Middle Ages in Europe and the Middle East, and it is easy to assume it had simply just remained in the region. Still, these fortresses have made their way worldwide, and Asia certainly has a fair share of them. Not only do these places have secure grounds, they are also often private residences of noble blood. This means that, back in their heyday, luxury was almost guaranteed. However, the beautiful thing about each of these castles is not their appearance (which is already stunning), but the rich history that their walls hold. Witnessing the architectural marvel when you visit these castles these places are an absolute must to visit, so prepare your passport and get ready to fly across the continent and get ready to feel like an absolute royal within the walls of these castles!

This is one of the most popular tourist attraction when visiting Seoul, and for good reasons too! Built in 1935, this castle holds a great amount of historical and cultural significance to the country. During the Joseon era, this served as the homes for the Kings, and also is the location for the government. Though the castle has been destroyed over the years, restoration efforts have made this one of the grandest places to visit in the continent.

One of Japan’s premier castle, Matsue Castle is truly a sight to behold. The iconic black walls earned it the nickname of “black castle”, and it is both amazingly fortified while being incredibly grandiose. Walk around the castle grounds and indulge in the tranquility of nature. Best of all, the castle is a great spot for viewing the cherry blossoms, so drop by during March and April if you’re interested in seeing it.

Mehrangarh Fort sits solemnly overlooking the city, nearly 400 feet above, and is truly spectacular. When entering the fort, pass by its seven large gates that provide ultimate fortification, and enter a palace like no other. With detailed and ornate decorations adorning the walls, be prepared to be amazed. Don’t miss out on the fort’s Pearl Palace for the royal throne, or its numerous galleries and temples that are incredible as well!

Osaka’s Himeji Castle contrasts starkly with the Matsue Castle in Shimane. With its white exterior, it sits elegantly atop a hill overlooking the city. Unlike Matsue, Himeji has survived plenty of bombings and destructions, only to be preserved and restored carefully to return its prestige. Not only is this the largest castle in the country, it is also an architectural marvel.

With the delicate Khmer roofings, gold-and-silver accents, as well as its sheer size, the Royal Palace in Cambodia has truly earned its spot on this list. To this day, the king resides within the palace, so certain areas are closed off for public access. Still, spots like the Silver Pagoda (with ornate silver tiles earning it its name) and the central compounds are open for visitors to walk around.

The Nijō Castle houses the Ninomaru Palace and Honmaru Palace, known for their elegant and elaborate design and decorations. Surrounded by moats, this is a flatland castle that has been the residences for the Tokugawa shogunate, or the Edo-era feudal government in Japan. The architecture has earned high praises, but none so much as the intricate artwork found throughout the compound.

Serving as the main residences for the emperor during India’s Mughal Empire, the Red Fort is an absolute spectacle as well. The style of the castle has influences from all around the region, and its beautifully ornate design has made this palace a UNESCO World Heritage Site. Other than admiring the exterior of the castle, don’t miss out on the Hall of Public Audience, where the royal throne sits.

The Potala Palace was once the winter residences of the Dalai Lama, but has since been made into a museum because of its significance to Tibet. This palace is the highest ancient palace in the entire world, sitting on a hill and amidst the backdrop of the mountains. Built using only wood and stone, the palace was carefully constructed with two large structures: the Red Palace and the White Palace, both of which are stunning.

Visiting the Hue Citadel today is sure to impress, but it is merely a fraction of how incredibly wonderful it was in the past. Thick stone walls surround a moat, with many palaces and gates scattered around the complex. Known as the Imperial City, the Hue Citadel once had majestic pagodas and sprawling gardens. But, even after facing immense destruction from wars and amidst restoration efforts, the compound is still breathtaking.

True, having Turkey on this list might be cheating. After all, it is in Eurasia, but the Mamure Castle is stunning enough that we had to put it on this list. Immensely well-preserved since its construction in the 13th century, the castle is an extraordinary sight that should not be missed. Located right next to the sea, this complex also has a mosque and inner fortress that looks exactly as you would imagine a medieval castle to look like. 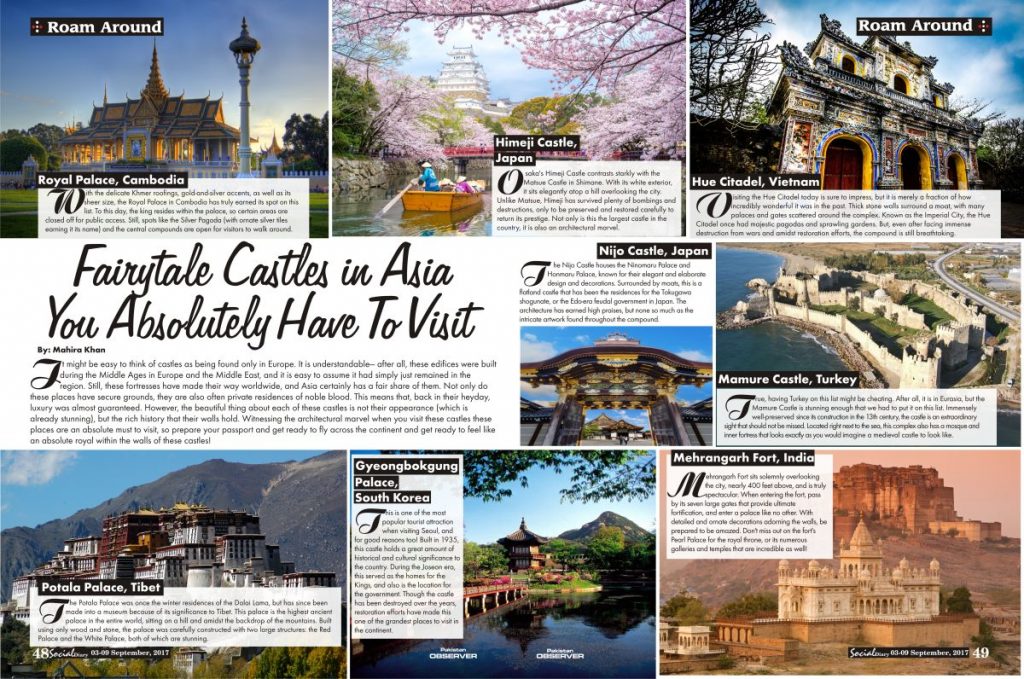