Faiza Saleem is truly a one woman show. With her sassy personality and witty humor, she has been in the spotlight for her standup comedy, with encore demands! In an exclusive interview for Social Diary Magazine, we find out what makes Faiza tick…

1)            Who is Faiza Saleem? Tell us about yourself and your background (education, lifestyle, siblings etc.)

Faiza Saleem is a lawyer turned comedienne who also loves acting but is only seen as the “funny girl” which is not too bad either. Faiza was born and bred in Karachi, although a lot of her childhood was spent in Germany. She has three siblings (a brother and two sisters) but she’s her family’s most coveted member or so she’d like to believe. Faiza studied law and was pretty good as a lawyer but wanted more from life and here she is!

2)            A woman in comedy, now that’s commendable. How did you begin channeling your humorous side to pave an altogether unconventional career path?

I just took the plunge. I’ve always wanted my work to matter in the larger scheme of things. I started with theatre then moved on to improv and standup comedy as well as social media. Currently I’m working on a TV show with Hum News.

3)            You are quite the Internet sensation! How did you initial start your page and when did it boom into success?

In 2014. I used to make memes about my friends and then I started making satirical videos the first of which went viral and gave the world ‘baji…eww.’

4)            Unfortunately in Pakistan, eccentric career choices are frowned upon. What are the challenges you faced/still face in your journey as a comedian?

I was telling someone recently that it gets tougher as you grow. Initially people don’t take you very seriously so it’s not so bad. With time, your relationships change and your life becomes more and more open to public scrutiny and with that, to public humiliation. I deal with all sorts of negative comments, pressure to do better and stay relevant now more than ever. If you’re not popular you’re just a struggling comedian and no one really respects that.

5)            We are sure your family and friends have been supportive. On the other hand, how have you been dealing with the backlash? We hope it doesn’t discourage you!

Sometimes I lash out and sometimes I ignore it. I get upset too but I never feel discouraged. I keep telling myself that there’s no one like yourself so there’s no one who understands your journey better than you do so keep calm and carry on!

6)            Who/what inspires you and your humor? Is there the comedy style of any particular famous comedian that you admire?

I draw inspiration mostly from people around me. What they say, how they behave…I love Hina Dilpazeer, Bushra Ansari and the late Moin Akhtar sb. I also really admire Melissa McCarthy, Aditi Mittal and Hassan Minhaj!

From the need for more representation of women in comedy. I felt that the complete lack of women in comedy meant that our side of the story wasn’t being told. It was all a boys club with men talking about how women are. Women needed/need to speak for themselves!

8)            We are so glad to know that you are now venturing into cinema! Are there any major films in the pipeline that you are working on?

Not at the moment but it’s going to happen this year iA! But I really have to respect the team and the role I get. I was offered a few roles for movies before and after Parchi as well but nothing that felt right to me.

9)            We love how your comedy style has bold and sometimes political underlying tones to it. How successful do you think are such subtle statements in addressing women empowerment and other societal issues?

I don’t know about how successful I am. I really don’t. But when a woman comes up to me and says that I inspire her, I feel grateful and that my work matters to people. Also the fact that so many women have entered comedy and are taking it as a proper career choice, after seeing me is really humbling.

A bunch of times. But recently someone came running to me for an autograph outside a shadi hall and that made me really happy. Most people come for pictures but I think autographs are the real deal! I love my fans and no matter how awkward they seem, I really enjoy meeting each and every one of them!

My entire journey so far seems so surreal. A couple of friends were talking about dream jobs and I felt so so lucky that I’m doing mine.

12)          Is there anyone in the industry who you would like to collaborate with in the near future?

Lots of people. I’ve worked with Mahirah and Osman but I’d love to do more projects with the two of them. Then there’s Hina and Bushra aapa. I did a TV show with Hina aapa years ago but not for long. I really hope we get to do something together again.

13)          What advice do you have for girls who look up to you as a role model and are apprehensive about starting out in a field similar to yours?

Just jump in. Don’t think about the future. If you’re true to who you are and what you want from life, happiness and success will follow. So will all the Nay-sayers!

The Perils of Being Moderately Famous by Soha Ali Khan

Cast Away, Wonder, The Theory Of Everything..to name a few. Btw I also LOVED Cake!

To lose myself on the way.

Ralph Lauren by Ralph Lauren currently but I’m big on perfumes so I have quite a few I like.

Both. Whatever is required of me. 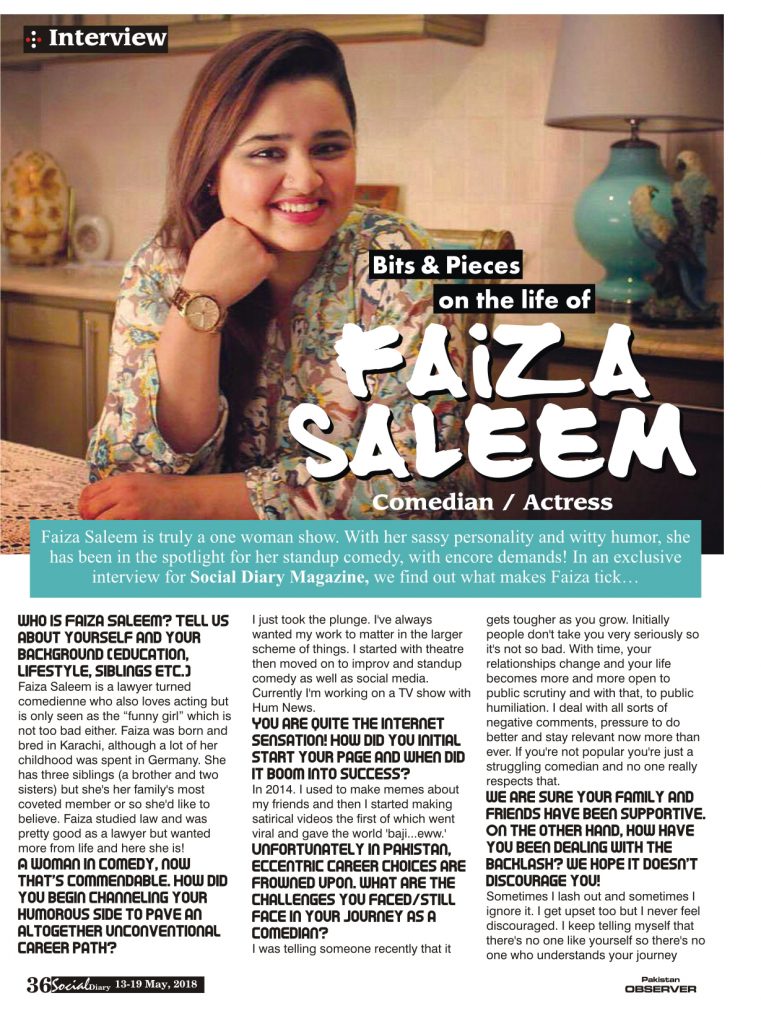 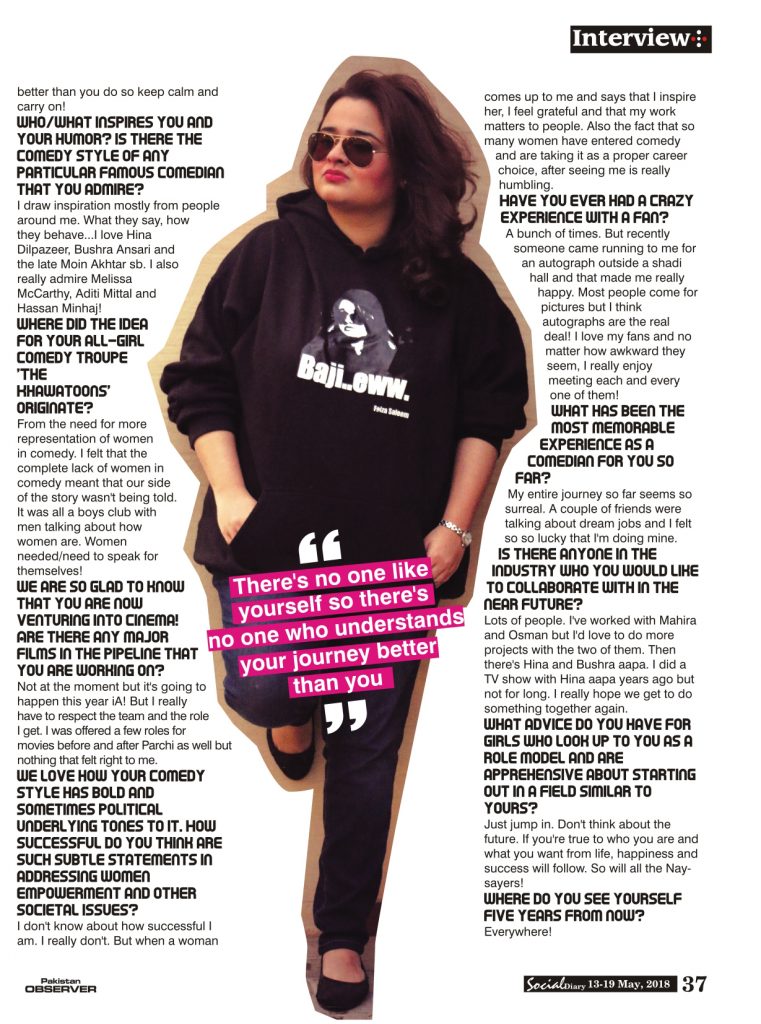 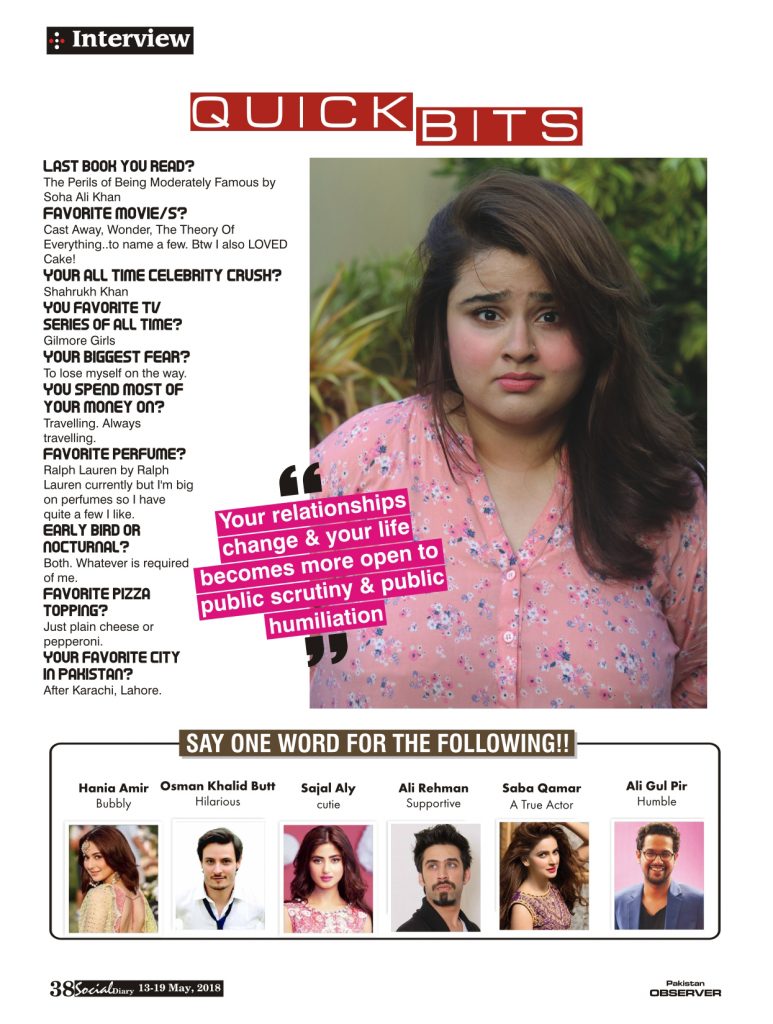 One in a million- Celebrating Mother’s Day

In Conversation with Zenith Irfan.

One in a million- Celebrating Mother’s Day