by admin
in Gossips
Reading Time: 3 mins read
0
Share on FacebookShare on TwitterShare on whatsapp

Zareen Khan says “I know my Islam very well…”
The beautiful face of Bollywood industry, Zareen Khan who was introduced by Salman in Bollywood industry said that she know about her religion (Islam). She said, “I am Muslim and I know about my Islam”. Zareen is recently doing work in Hate Story 3 which is full of bold scenes. After her work, Zareen is criticized by her Muslim fans and she clearly mentioned that she did not bother about views of people. She also said that in the end it’s between God and your ownself. She said that Islam doesn’t allow anyone to point on others and if anyone doing it then it’s wrong.

Is Urwa in Mumbai to sign Bollywood movie?
Pakistani actress Urwa Hocane has landed in Mumbai. An Instagram post showing the Pakistani starlet in India’s entertainment capital, created quite a buzz on social media. What could it be? Urwa’s sister Mawra Hocane is already stationed in Mumbai these days where she is busy shooting for her debut Bollywood film ‘Sanam Teri Kasam’. So we thought why not ask her what this is about. “There are a few things in the pipeline for her [Urwa]. She has finally got the time to attend all the meetings in Mumbai as she was busy with her films in Pakistan,” Mawra told. In an earlier interview, Urwa had disclosed that venturing into B-Town and Hollywood have always been on the cards for her. “As long as there is a positive vibe and good story, I am willing to go to Bollywood, Hollywood or anywhere else. My sister Mawra is currently shooting three films in India and besides, I think it promotes a healthy image of our country.”

Woah! Now wouldn’t that be a refreshing new pair!
Priyanka & Sushant Singh paired in Sanjay Leela Bhansali’s next?
In the recent days, while some moviemakers are bringing together Bollywood’s accomplished love pairs, some are also bringing forth new jodis that seem to have a wide appreciation! Well, while some romantic jodis of Bollywood have made their pairing iconic, some are experimenting for a better jodi. Among these experiments, you’ll find Sushant Singh Rajput and Priyanka Chopra! Woah! Hold up there! They are together! That’s some refreshing pair to look forward to, don’t you think? Now while they are currently busy with their heavy shooting schedules, it sure looks that they’ll make a fine pair! Do you think their pairing will rock B-Town?

Red alert! Kate Hudson shimmers as she takes the plunge in a sequined jumpsuit at Campari event!
The 36 year old looked absolutely stunning in her Naeem Khan jumpsuit, matching the red carpet in the scarlet number. The designer is world-renowned, since dressing the likes of Beyonce, Taylor Swift and Emily Blunt and is known for his impeccably cut dresses and the pure sophistication that oozes out of his pieces. Kate Hudson here really is case in point. The jumpsuit fits her impeccably and while she looks remarkably elegant, the plunging neckline and sparkling finish gives her serious sex appeal. She accessorized the look with a pair of large dangling gold earrings with a matching gold bracelet and ring on her left index finger. Kate chose to highlight her natural beauty, opting for minimal make-up and her signature locks in a messy updo with the front down in a middle-part. 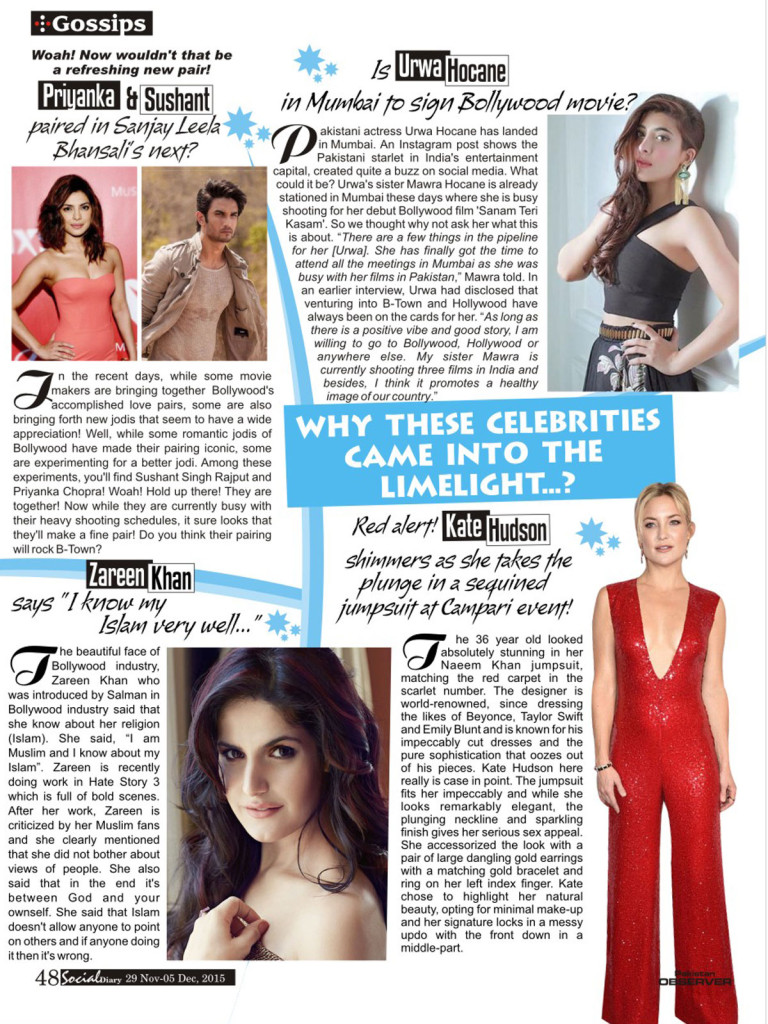 Sonakshi Sinha’s breath-taking wedding outfits will make you want to get married ASAP!