by admin
in Gossips
Reading Time: 3 mins read
0
Share on FacebookShare on TwitterShare on whatsapp

Aamir Khan responds to the verbal attackers!
There were clear cut and note worthy statements from Aamir Khan who stated that his verbal attackers will not be able to change his opinion and neither will he consider the option of leaving India. He further said that he and his wife Kiran Rao would not leave. He also categorically stood by what he said in the interview that triggered a storm. Aamir Khan stated and emphasized that “First, let me categorically state that neither I nor my wife Kiran have any intention of leaving the country. Neither did we ever, nor would we like to in the future,” he said in a statement. “Anyone implying the opposite has either not seen my interview or is deliberately trying to distort what I have said. India is my country, I love it and feel fortunate for being born here, and this is where I am staying.” “Second, I stand by everything that I have said in my interview,” he went on to say. “To all those people who are calling me anti-national, I would like to say that I am proud to be Indian, and do not need anyone’s permission or endorsement for that. To all the people shouting obscenities at me for speaking my heart out, it saddens me to say you are only proving my point.”

I am married and mother of a boy: Mahira Khan
Mahira Khan said that she is not working with Ranveer Singh in any movie. “Yes I like Alia Bhatt and Ranveer Singh, but I am not working in any movie with them at present”. She also added that “I am married, my husband name is Ali Askari and I am mother of a boy. I will not let any movie disturb my personal life”. By giving this statement she cleared all the ambiguities about her relationship status. People were spreading rumors about her and Ali, but she cleared everything in just a single statement.

Why is Aishwarya Rai hiding her face?
Looks like she is preparing for a new look. We are really curious to know what look is she hiding behind that hair…
She definitely seems to be experimenting with some new look! At least, that’s what these picture suggest! Dressed in a white shirt paired with high-waist trousers, the hottie was suspiciously spotted rushing into her vanity van at the Film City recently! Obviously the photogs were amused looking at her deliberate efforts to cover her face with that hair! But Ash refused to stop and clarify! We wonder what the disguised face all about is. Well, we don’t know what’s covered behind that hair but this picture have really made us speculate a hell lot of things!

Lindsay Lohan stuns in cream silk slip with sheer lace detailing as she parties in Dubai
She’s back at work on her first film in two years, The Shadow Within. But that didn’t stop her from cutting loose on the dance floor during a night out in Dubai, living it up at the VIP Room. She was rocking a cream silk slip, embellished with pretty white sheer panels and floral lace detailing. The 29 year old actress dressed up her look with a simple pendant necklace and a statement silver ring. The Mean Girls favourite wore her auburn locks tumbling over one shoulder and enhanced her features with natural make-up. Lindsay looked the picture of health thanks to her bronzed, dewy complexion and seemed to be having a blast as she took a break from filming her current project. 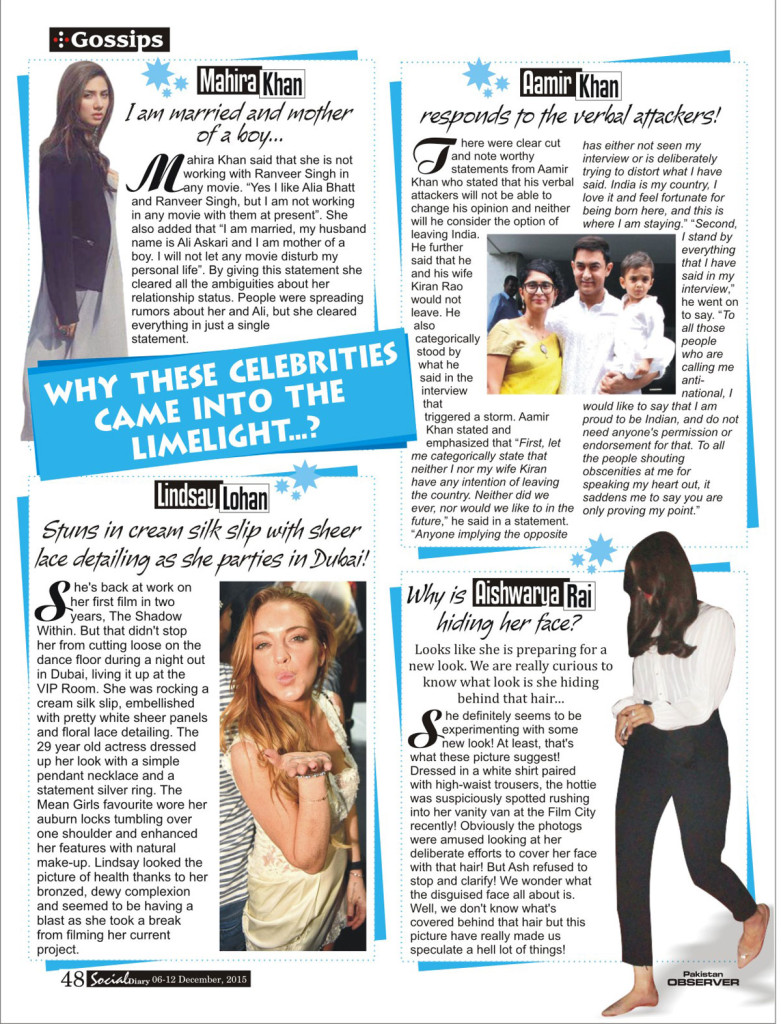 Winter Essentials: A handful of PISTACHIOS acts as an excellent snack to calm your mid-day cravings…