by admin
in Articles, Reviews
Reading Time: 2 mins read
0
Share on FacebookShare on TwitterShare on whatsapp

AN important historical site 16km from Mardan, Khyber Pakhtunkhwa, Takht-i-Bahi (Throne of Origins), is situated on a 152m high hill. It is the remains of a complete Buddhist monastery with four distinct parts. The history of Takht-i-Bahi and the neighbouring small fortified city of Sahr-i-Bahlol ranges from the First to the Seventh Century AD.

Takht-i-Bahi was originally a Zoroastrian complex but with the advent of Buddhism, was converted into a Buddhist monastic complex. Due to its high location, Takht-i-Bahi remained safe from different invasions and is exceptionally well-preserved to this day. It is regarded by archaeologists as the most imposing relic of the Buddhism in the Gandhara region of Pakistan. Many fine sculptures have been dug up from this historical site.

The Fort and Shalimar Gardens, Lahore, 1981

THE Fort and Shalimar Gardens in Lahore are outstanding architectural monuments of the Mughal era which are famous for their royal grandeur. In the mid 16th century, Lahore became a centre of culture and art. Emperor Akbar built the grand fort in the walled city and the Deewan-e-Aam, built in red stones belongs to this era.

His successors kept on making additions to the Fort and Shah Jahan’s Naulakha and Sheesh Mehal and Jahangir’s pictured wall are great tourist attractions to this day. Though the fort was destroyed and rebuilt several times by various rulers, we can still see beautiful marble palaces and mosques decorated with mosaics and gilt.

The Shalimar Gardens, built by Shah Jahan in 1642, are spread over 16 hectares. These sprawling gardens are influenced by Persian and Islamic traditions and are divided in three descending terraces. They have multiple fountains in water channels. The mosaic, marble nets, waterfalls, large ornamental ponds, flowering plants and trees are a beauty to the beholder’s eyes.

MAKLI, the necropolis in Thatta, Sindh, is among the largest Muslim cemetery in the world. Its history dates back from the 14th to the 18th centuries. The tombs belong to four dynasties of Sindhi rulers, as well as Sufi saints and scholars.

The monuments and mausoleums in Makli are built from high quality honey-coloured lime-stone, intricately carved bricks and glazed tiles.

Some tombs of famous saints and the one of Jam Nizamudin II, are well-preserved. Makli represents the civilisation of Sindh in that era and can also be called a blend of Hindu, Mughal and Islamic cultures.

ROHTAS Fort is a garrison fort built by Sher Shah Suri after he defeated Mughal emperor Humayun in 1541. Situated on a strategic location on a small hill near River Kahan, it is a classic blend of early Muslim military architecture and artistic traditions of Turkey and the Indian Subcontinent.

Located about 16km from Jhelum city in Punjab, Rohtas Fort has massive walls and bastions which run for over four kilometres. The fort has 10 gates which enclose the citadel and army quarters. Haveli Maan Singh added later on by Emperor Akbar has Hindu architectural influence. 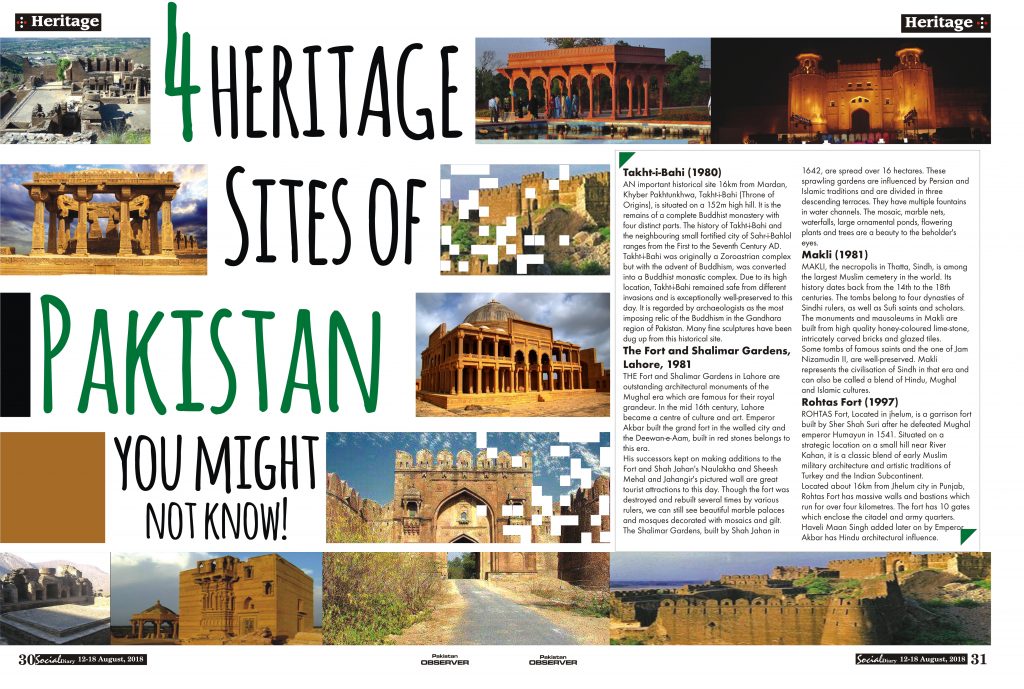 Iqra Aziz  is bringing on the silk charm in Shigar Fashion   Merium Pervaiz beams in this bright look from...

Fit & Fab with Celebs featuring: The Ever Stylish’

If you're anything like us, you too must have wondered how celebrities manage to look so great. Do they work...

What Your Ears Divulge about Your Personality?

D o you know what the shape of your ears says about you? It will surely be of interest if...

Create Your Own Homemade Herbicide!

When it comes to creating a beautiful garden for yourself, you will be amazed by the kind of natural ways...