Is a bowl of soup really a healthy meal now a days?

Soup seems the perfect warming winter meal. But how healthy is it really? And which type of soup should you choose?  Nutritionists urge us to eat five portions of fruit and vegetables a day but it can be difficult to hit these targets. A bowl of soup is one excellent way to make sure you are getting at least two of those portions. A mixed vegetable or minestrone soup will also ensure you get a good mix of minerals, nutrients and phytochemicals – anti-oxidants found in plants that destroy harmful chemicals in your body. Researchers have now discovered that a certain soup could help prevent cancer. The spicy Tom Yum Gung soup with shrimps, coriander, lemon grass and various chillies may also contain cancer-fighting properties. Researchers decided to investigate the ingredients in the soup after it was discovered that Thais have a very low rate of intestinal cancers.

Scientists claim that this particular soup is 100 times better at preventing cancers than other types of food. A combination of the main ingredients in the soup can block cancer cells. The research team is now trying to extract the chemical compounds from the ingredients to discover exactly how they fight against cancer. The study did not identify how much of the soup was needed to prevent cancer. The type of soup you choose to eat can have a significant impact on your diet. When you are picking a soup it is important to look for ones that contain vegetables for vitamins and nutrients, and beans or pasta for slow-release carbohydrates to give you energy throughout the rest of the day.

Try and avoid ‘luxury’ soups containing cream as this means they could have high levels of fat. You should also avoid canned and packet soups as they contain higher amounts of salt and additives. So which type of soup is right for you? Here’s a guide to the range of soups available. Canned soup contain lower amounts of vitamin C, vitamin B1 and much more salt than fresh or homemade soup to help prolong its shelf-life. If you are on a low salt diet, check the labels on the can for the amount of sodium in the soup.

Sodium is the ‘raw’ form of salt found in foods. The recommended amount of salt we should be eating in a day is 6 grams, or one teaspoon per day.

But there are some benefits to eating other soup like tomato soup contains high levels of lycopene, the cancer fighting ingredient found in tomatoes. It is better in a processed form than in fresh tomatoes, so it is important to eat a mixture of the two.

Soups made with beans and lean meats such as fish provide lean protein. Beans also give you fiber. Vegetables in soup contain many vitamins, such as A and C. Cream soups supply calcium and vitamin D. Most soups, if made with lean meat, are low in fat, making them a good choice for anyone concerned about fat in his diet. Use fat-free broths and lean meat to reduce the fat content of soups. Skim milk for cream soups; or, instead of milk, you can use pureed white beans to thicken soup. To further reduce the fat content of your soup without sacrificing flavor, chill it and skim off the fat before reheating and serving.

“Try and avoid ‘luxury’ soups containing cream as this means they could have high levels of fat.” 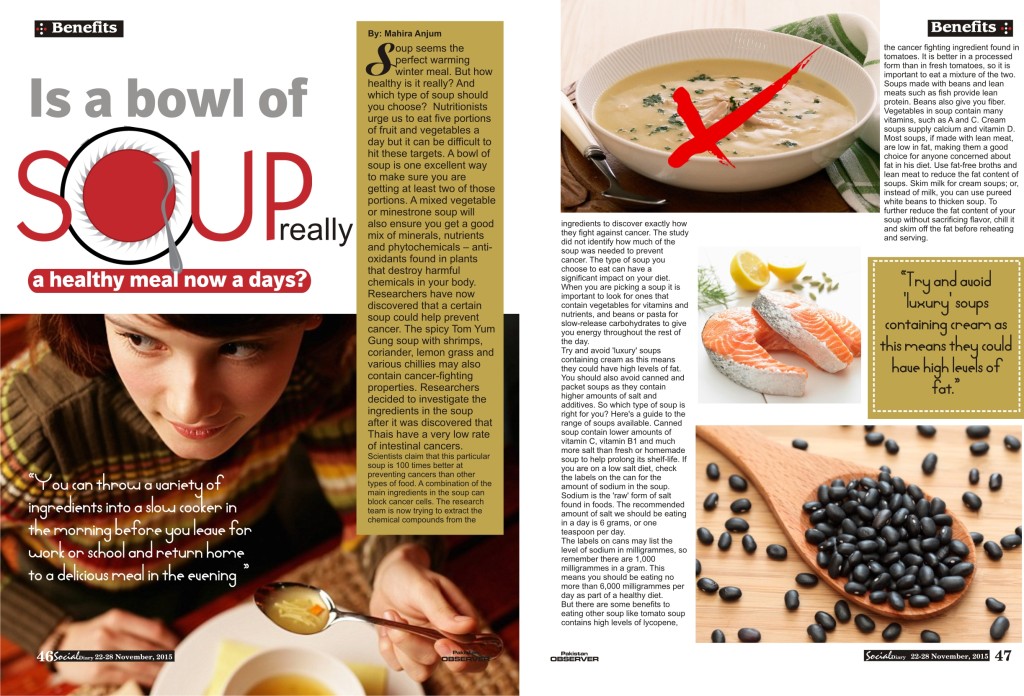