Raising a Son with Autism

I am a mother of two and Asher Alam is my second child and only son. With his birth came the fulfilment of my desire to have a son in the family and we couldn’t have been happier. Asher was a seemingly healthy and normal one year old but little did I notice what was awaiting us. After he crossed the age of one his behaviour began to change gradually. He was not babbling like other children his age nor was he interacting with others let alone pointing out things he wanted and this had me slightly concerned. I gave it time and over the course of another year I hoped I was wrong but after his second birthday I knew there was more to his behaviour than just a hearing impairment. He was also lagging in speech among his age group of children and his condition was not getting any better. I went into pure denial and people had all sorts of theories as to why his milestones were delayed, the most common being ‘boys talk late and you should talk to him more’.
At the age of 3, Asher was diagnosed with PDD( pervasive developmental disorder; which includes atypical autism and is the most common; autism, the best known, now understood to be part of a spectrum),
ADHD (Attention deficit hyperactive disorder) and as much as I tried to stay positive my whole world collapsed. I immediately went to the therapists and they assured me I would see wonders in 6 months only to give me hope. I prayed to Allah for a miracle, for something to magically help and cure my child. That is when I went into my shell and started avoiding people, friends, family and refused to tell people about his condition. As he grew older from then things just got worse to my dismay.  I was exhausted beyond imagination and in the process i was neglecting my daughter and we as a family were suffering. The sleepless nights that followed were tough and the days would be spent after him since he was on his toes constantly. I started leading a secluded life till the point I felt I’m fighting this battle all alone. To make things worse Asher’s sensory issues were at their peak, he became extremely sensitive to sound, couldn’t tolerate crowds or loud noises and distinct smells.
During the journey I met many nice professionals who later turned into my best friends but nonetheless every coin has two sides and some people exploited us financially , taking advantage of our situation. Our weakness turned us into their slaves as we were expecting a miracle and continuously fulfilling their demands.
Asher said his first word at age 6 and after the age of 9 years he started making progress. His gross motors skills are God gifted, he is a born swimmer and has all the qualities of a gymnast and I feel he is nothing less than any regular child.
Someone I am truly grateful for though is Saba Mohsin who is truly an angle in our lives and without her guidance I could not have worked on his sensory issues, and Asher being a different child needed all the help he could get. Ayesha butt, his amazing speech therapist helped me beyond imagination.  Sehar gillani and Saad Akbar gillani his ABA therapist worked with Asher with so much dedication, patience and love that I will forever be indebted to them. Asher showed improvement within weeks of these sessions. Asher showed charges in weeks. His receptive language is still increasing by the day and he has progressed a lot in terms of sensory issues. Zuhair and Kishwar also gave Asher quality time and worked tirelessly with him. Now at the age of 12 , I see a loving boy who has a lot of potential, his magical smile makes his own special place in people’s hearts. This boy taught me love has no language, he taught me patience that I thought I never had and he taught me to appreciate small things in life.
To the young struggling mothers , all I would say from experience is never give up , the best is yet to come! Always always trust your instinct.  Asher still amazes me every day. 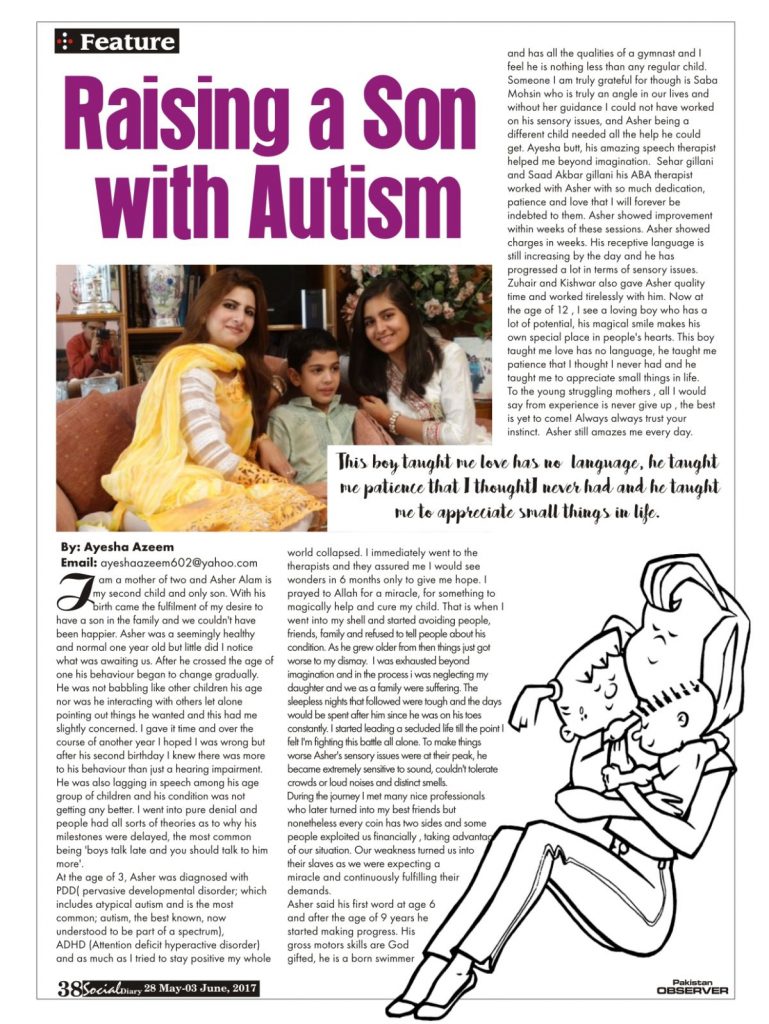 Happy Kitchen in the Holy Month