Rucksar Naaz- we’ve all seen her endlessly entertain with vlogs on her channel ‘browngirlproblems1’ and adore her witty take on culturally relevant issues. Now she is all set to debut in her first television drama ‘Main Khayal hoon Kisi Aur Ka.’ Social Diary exclusively presents the first interview with the star…

Hey, my name is Rucksar, some of you may know me from my videos on YouTube by the name of “browngirlproblems1.” I began making comedy videos in 2016, highlighting/challenging societal stereotypes that a “brown girl” may experience living in a western world.  The page soon grew and has luckily got me to where I am now.

Now a bit about myself, I’m born in the UK, Sheffield, my parents are from Azad Kashmir, which means that I speak Potwari, a language that most of you may not have heard of.  I have 2 sisters 2 brothers and I am youngest of them all! Along with being a YouTuber, I have an Undergraduate degree in Psychology, and a Masters in Adult Nursing. Who says laughter isn’t the best medicine!

2)        We are anticipating your on-screen debut in ‘Main Khayal Hoon Kisi aur ka.’ How did you initially get discovered for this role?

A lot of good luck and duas! Haha Initially, Imran Raza Kazmi (producer) approached me following watching my videos on YouTube, from the get go he was complimentary of my acting skills and was so encouraging even when I didn’t believe in myself. I’m genuinely so grateful, he’s given me the confidence and made *what I thought was an impossible dream* come true! Imran has been majorly instrumental in my journey from social media to TV, something I will forever be thankful for.

3)        You are no stranger to the camera- having a widely popular vlog channel ‘Brown Girl Problems’ and winning an award for it. However this will be your first time working for national television. Were you nervous working on the sets of MKHKAK?

Majorly nervous! Creating content online is a world away from professional TV. With social media I’m generally filming alone with just me and my camera, in my comfort zone. I don’t have any processional experience in acting, let alone act in front of a whole bunch of people. If that wasn’t scary enough let’s add the fact that I have to now speak in a new language, with professional actors! Nerve-racking stuff!

4)        How are you preparing for your role in MKHKAK? Is there a methodology you are applying to understand and get into the mindset of the character?

From making videos on YouTube, I feel I have good observational skills now from years of people watching. The character I play in the drama is quite different from me in reality, luckily, I’ve come across a lot of girls like the character I play (Sonia), daddy’s rich spoilt girl, fiery, fierce and super confident.   So I shall channel my inner Diva!

5)        Your vlog channel ‘Brown Girl Problems’ addresses misogynistic and societal problems in a humorous way. We hope that any backlash that you receive does not discourage you?

With anything in the public domain you will expectedly get some backlash, however I’ve been lucky that it hasn’t been as much as I initially anticipated. That doesn’t go to say that it doesn’t get me down on occasions, particularly when I know my intentions and the thought process behind my videos are for the greater good I’m blessed with amazing family and friends around me, who are constantly reminding me about the positive I’m doing for the majority so it motivates me to continue making videos for the young and vulnerable that watch my videos.

6)        Undoubtedly there must be some fun moments behind the scenes. Share a few quirky incidents from the set?

Being on set is honestly, like being part of one big family at IRK from cast to the crew, when you’re working for 12 hours on set, making fun of each other makes the hours go by quickly. Most of the jokes are as a result of my poor remixed urdu/ potwari language.  I obliviously slip in and out of the two languages, I remember loosing my scarf on set and asking everyone where’s my “cheela” (Scarf in Potwari) forgetting that it’s not an actual Urdu word, you best believe everyone broke into the song: “my name is cheeela, cheela ki jewani,” instead of actually finding my dupatta.  So now on set everyone is teaching me Urdu and I’m teaching them Potwari- lets see who actually learns the most in the end!

7)        Ali Rehman and Hareem Farooq are established actors in the industry. How has it been working with them so far?

I love both Ali and Hareem! I’ve been watching them on TV and cinema for years, so I was super nervous before coming to Pakistan. I can remember meeting both of them for the first time and having the surreal feeling, thinking, ‘how on earth have you managed to wing your way here Rucksar.’  Both are superstars and I’m pleasantly surprised that in reality both are the most humble, funny, supportive individuals you will ever meet. Ali is literally hilarious and crazy so our banter is quite similar so we got on right away, he’s forever coming out new and innovative ways to help me remember or pronounce my lines correctly. Hareem, well I have a major woman crush on her and for the first week I would just blush when she spoke to me. True story. I can confirm by week 2 I managed to string a sentence to talk to her.  By week 7 I’m pretty sure we will be best friends haha. She’s so sweet and uber cool in reality, so I have no choice to fan girl more!

8)        How do you spend your free time? What interests and hobbies do you have outside of acting?

Free time?? What does that mean! Haha My life consists of work (as a Nurse) by day, filming, editing, uploading videos by night and being a trainee cook by evening- helping mum out around the house. Haha when I do have an odd evening spare I like to just spend time with my best friend doing normal stuff like movies, shopping, eating food and eating more food.

9)        Is there any actor whose work has been particularly inspiring? (can be from Hollywood, Bollywood, or Lollywood)

Lollywood- Hareem Farooq (I’ve been lucky enough to see her act live from a creepy distance and her acting skills are amazing!)

Speaking Urdu for sure! As I speak Potwari at home, my Urdu isn’t the best so now that I have to speak Urdu, it becomes a remix of Urdu, English, Potwari and Hindi (I blame Bollywood). Leaving everyone on set incredibly confused- I need subtitles!

11)      Is there anyone in the industry that you would like to work with in the near future?

Honestly I’m still not over how I managed to work with talented actors like Ali and Hareem for my first project, so haven’t really thought too far in the future and living for the moment right now. I do however feel everyone you meet in life has something you can learn from and use to grow as an individual, so I’m open and excited at the opportunity to work with anyone.

12)      What are your plans in the upcoming months for your vlog channel?

At the moment being in Pakistan shooting, I’ve shifted my focus on Vlogs than actual comedy skits. In doing so, I hope I can show my viewers from around the world how beautiful Pakistan really is in my vlogs.

Just a big thank you to each and every single one of you, it’s your duas and support that have allowed me to have these amazing opportunities. All that I am and In’Sh’Allah be is all down to you guys, I appreciate it from the bottom of my heart.

Oscar- so I can have my Jen Law falling-down-the-stairs-moment.

Tour with selena Gomez for sure!

3)        Guest Star in Keeping up with the Kardashians or live in the Big Brother house?

Guest Star in Keeping up with the Kardashians, I can totally be their long lost cousin from Kashmir, now that would be a plot twist. #Kar-desi-an

Chocolate- the world will be a very depressing place without it

6)        Would you rather read a book with an annoying cliffhanger, or one where your favorite character is killed off?

Rather wait till it comes out on film and kill my fav character.
7)        Be the best singer or the best dancer?

Best singer, I’d be the life and soul of every dolki/sangeet nights.

Never eat pizza again, you can eat fries with anything and everything. 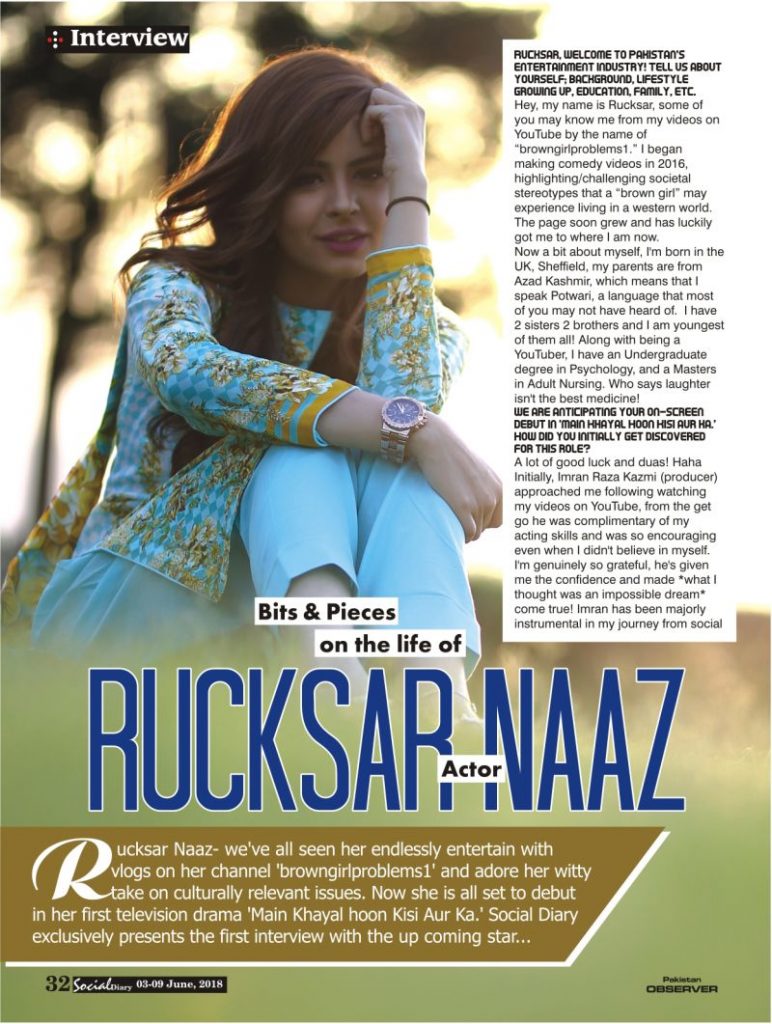 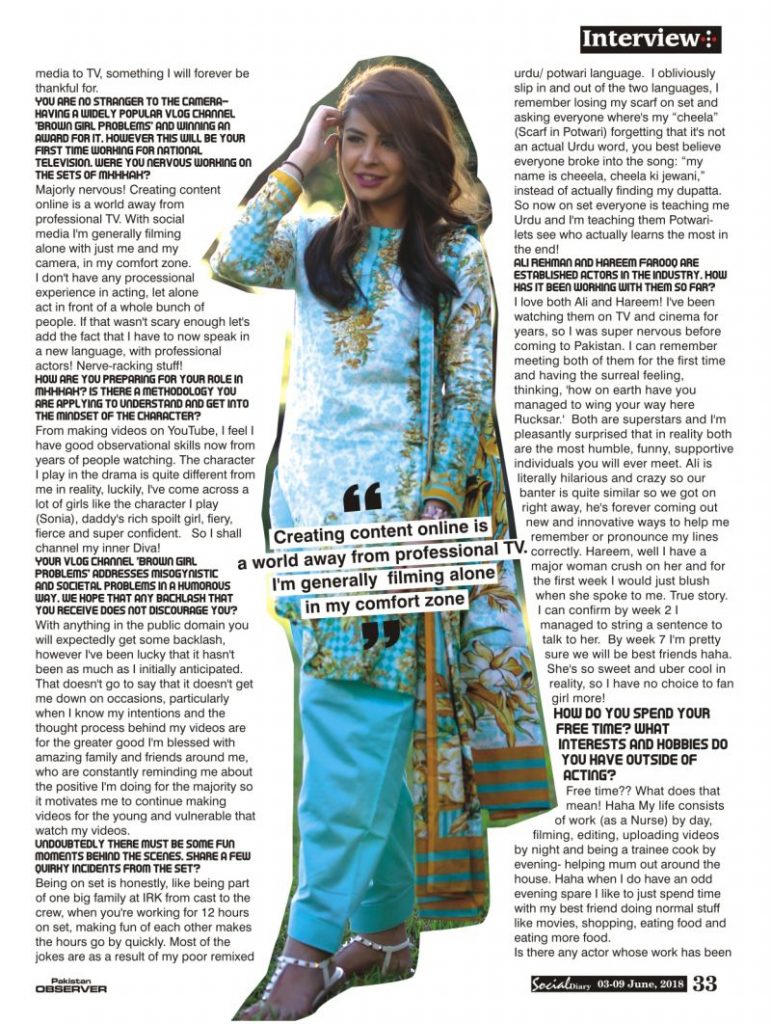 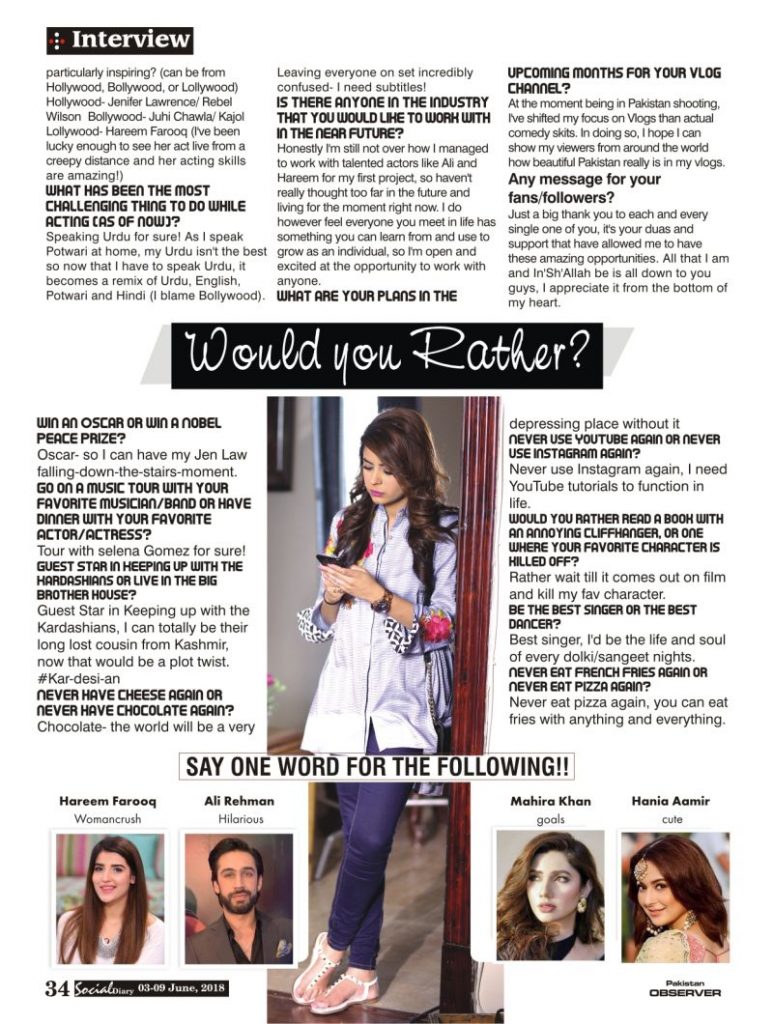 6 genius hacks to organize your fridge