“I belong to a family of very talented individuals…”

In the past couple of years, television has turned into a highly profitable, cash-generating industry in Pakistan. Pakistani television serials have not only been appreciated by the local audience, but also received critical acclaim worldwide which has resulted in several new entrants feeling comfortable exploring their passion for this field. 2016 will be seeing ace wardrobe stylist Sana Shahnawaz venturing into production with the serial ‘Mann Mayal’, which has been co-produced by Samina Humayun Saeed and Momina Duraid. The serial airs on Hum TV. You can explore amazing things of her; by reading an exclusive interview took by Social Diary……

I am basically a textile graduate. After completing my studies, I worked as a wardrobe stylist and eventually style director for over 40 serials while perusing my studies. My most recent involvement was in ‘Jawani Phir Nahin Ani’. I have always been more on the creative side, but working on these projects taught me how to manage things single handedly, work against deadlines and manage last minute crisis smoothly.

I belong to a family of very talented individuals. When growing up, I got a chance to see Samina and Humayun work tirelessly on various projects and manage several different things at the same time. That was very inspiring for me. Usually when as an audience we see a movie or TV serial, we appreciate the cast members or the director at most but I knew that the job of a producer is equally important. Since I have always been so involved in the entertainment industry, I felt the time is right to now explore fresh ideas and stories. With the encouragement of my friends and the faith my family put in me, I decided to produce ‘Mann Mayal’.

Honestly, it feels so surreal and I am truly blessed. When I started working on ‘Mann Mayal’, I was quite confident about the script and knew it has a lot of potential. But the support I have received from the industry is unbelievable. So many people have lent their support in whatever ways they could – I am very humbled.

I personally helped develop the story of ‘Mann Mayal’ with Samina Fazal, who is one of the most respected writers of the country. My co-producers are Samina Humayun Saeed and Momina Duraid who are the pioneers of production. The director is Haseeb Hassan who directed Diyar-e-Dil last year. The cast members include Hamza Ali Abbassi, Aisha Khan, Goher Rasheed, Maya Ali, Saba Hameed, Ismat Zaidi, Talat Hussain, Aiman Khan, Laila Zuberi, Sheheryar Zaidi, Mehmood Aslam, and Lubna Aslam. The OST has been sung by QB.

I think the hardest part is definitely overseeing everything. You have to be involved in each aspect which is quite a challenge. People like assuming I have 20 people bustling around me. That’s not true. I do everything on my own and actually work extremely hard to prove myself.

My upcoming serial ‘Mann Mayal’ is a complete package. It has an amazing cast of extremely talented actors, an engaging story, grand locations, glamorous styling – everything the audiences would love. I have put in my heart and soul in this project and it is now up to the audiences to judge.

I have already started working on my next project which is going to be a movie. I cannot just sit still.  I have to keep the ball rolling. I thrive on the rush. The movie will go on the floor this year. It has been written by Khalil Ur Rehman and will be directed by Nadeem Baig. I plan on disclosing the cast soon. Besides this, there are several TV serials that I am working on.

“Since I have always been so involved in the entertainment industry, I felt the time is right to now explore fresh ideas and stories. With the encouragement of my friends and the faith my family put in me, I decided to produce ‘Mann Mayal’.” 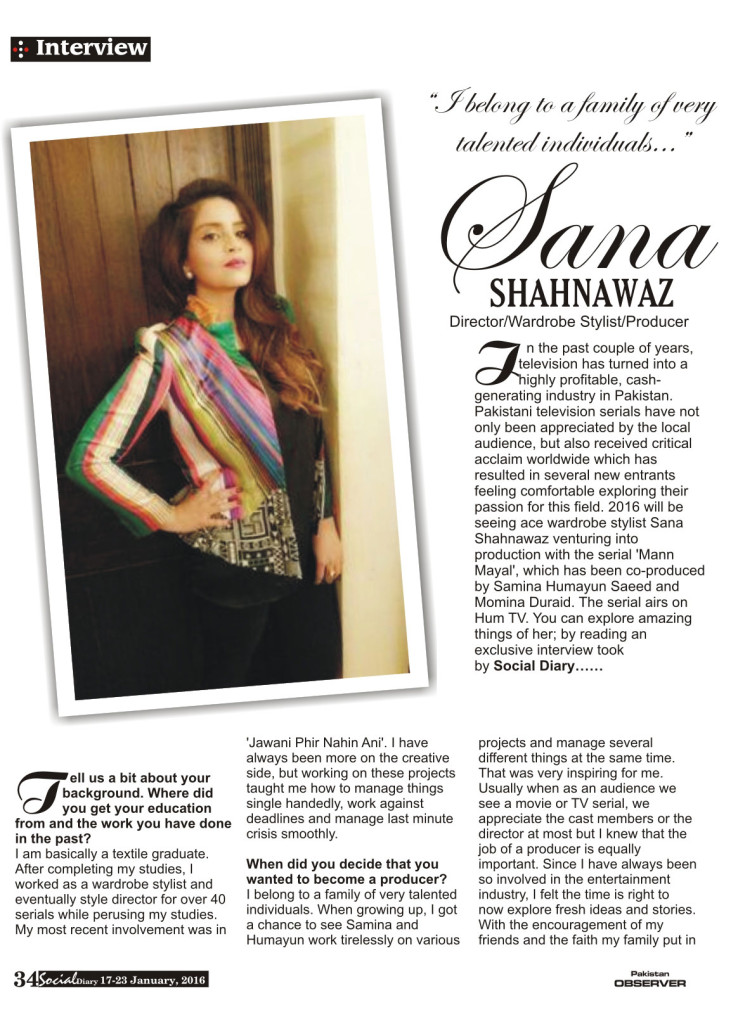 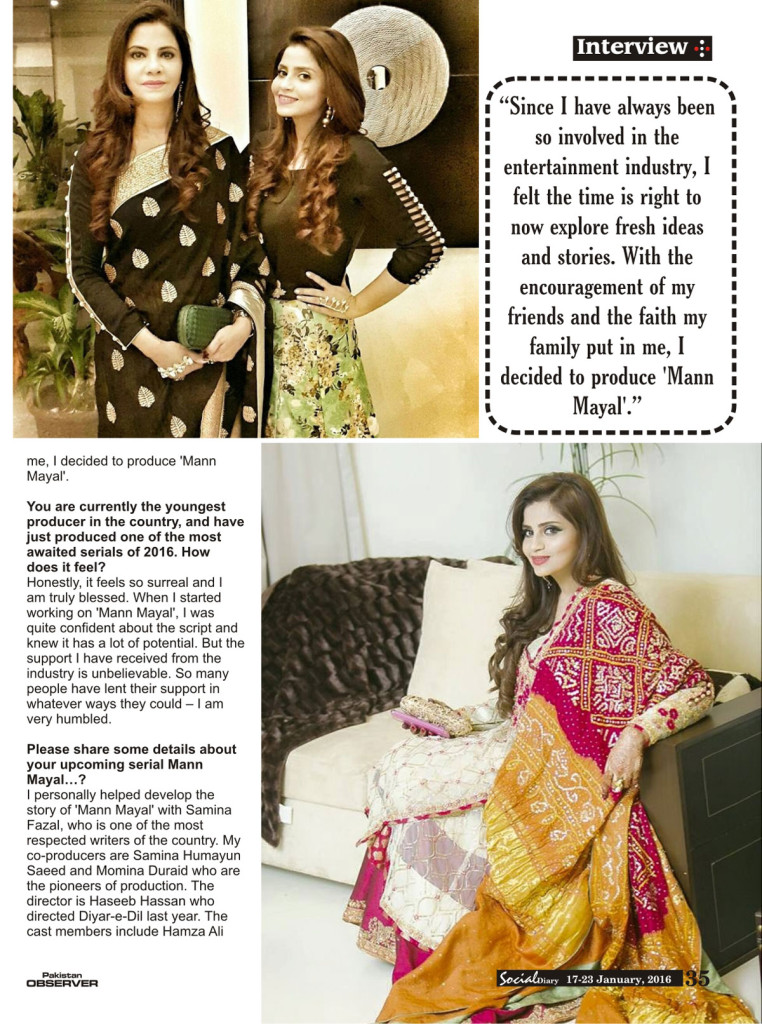 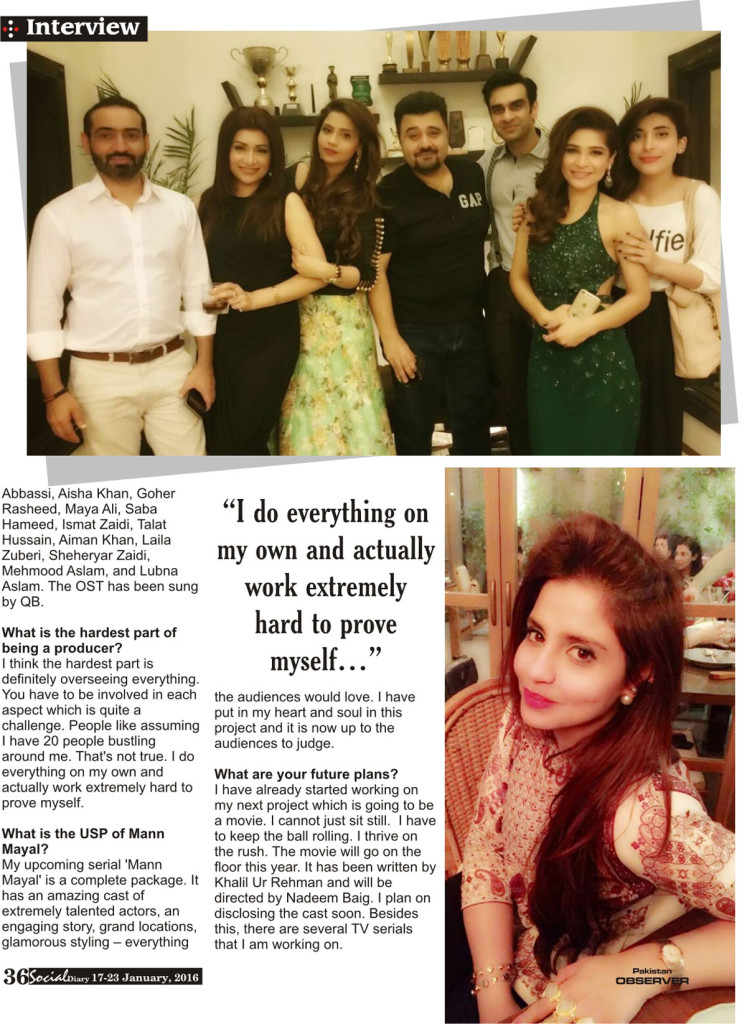