The healing powers of honey

by admin
in Articles, Benefits
Reading Time: 3 mins read
0
Share on FacebookShare on TwitterShare on whatsapp

Honey has always been regarded for its healing capabilities since time immemorial and this has also been identified by researchers. Healing powers of honey has been found useful for treating several diseases, caused by pathogenic fungi that cause severe infections to people vulnerable to them.

A very effective link has been discovered about medical type of surgihoney with the destruction of fusarium, a fungus that cause blindness or in some cases is fatal. Health benefits of honey and many healing effects of honey were realized soon enough.

Researchers have tested different concentrations of surgihoney, which is a biologically engineered to produce reactive molecules containing oxygen, in order to see how effective it may be in treating fungus Fusarium, which is generally found on plants and soil.

During the test it was recorded that even the lowest concentration had a very noteworthy effect on breaking cell wall of fungus, indicating its potential as a future treatment for patients, as per the study.

Chronic infections, similar to those found in long-lasting wounds consists of around 60-80% infections found in human and the manner in which a fungi attacks a wound is linked with the usage of antibiotics of a broad spectrum.

A thin layer of micro organisms grouping together forms Biofilms, which leads to delayed healing of wounds and severity.  The research does showcase the scope of further studies on application of honey in treatment of fungal infections and will allow in future adopting different methods for treating many infections.

Considering that honey’s potential has been gauged beyond its remedial value it is worth the effort to celebrate a honeylicious winter this season:

Honey in your fitness regime

Experts in sports nutrition have found honey may be one of the most effective forms of carbohydrates to ingest just prior to exercise since it is easily digested and released into the body at a steady rate for use during exercise. One teaspoon of honey taken after workout helps muscles to recuperate.

Honey to winter-proof your skin

Winter is especially harsh on skin, lips and hair, and honey is an easy and inexpensive way to get spa-like results at home:

Puree 1 medium cucumber in a blender and drain the liquid through cheesecloth. Add 2 teaspoons honey and mix. To use, shake bottle and saturate a cotton pad with the lotion. Sweep over face, neck and chest and let air dry.

There has been a lot said about the negative effects of white sugar on the body. Honey is a great substitute that is as sweet but also safe to consume. Though honey also includes simple sugars in its chemical makeup, it is quite different from white sugar in that it contains about 30% glucose and 40% fructose – two monosaccharide or simple sugars – with 20% other complex sugars. Honey also includes dextrin, a starchy fiber. This combination helps the body regulate blood sugar levels. For those doing yogic practices, consuming honey brings balance to the blood chemistry and is especially recommended. Regular intake of honey makes the system more vibrant. Taking tepid water mildly laced with honey in the morning before beginning the practice can open the system up.

Honey helps reduce constipation, bloating and gas, thanks to it being a mild laxative. Honey is also rich in probiotic or “friendly” bacteria such as bifido bacteria and lactobacilli, which aid in digestion, promote the health of the immune system, and reduce allergies. Another point to remember is that honey is not very different from white sugar when it comes to diabetics. Both products increase the blood sugar level and the same care must be taken by diabetic patients. Let’s stock up on honey for a healthy season! 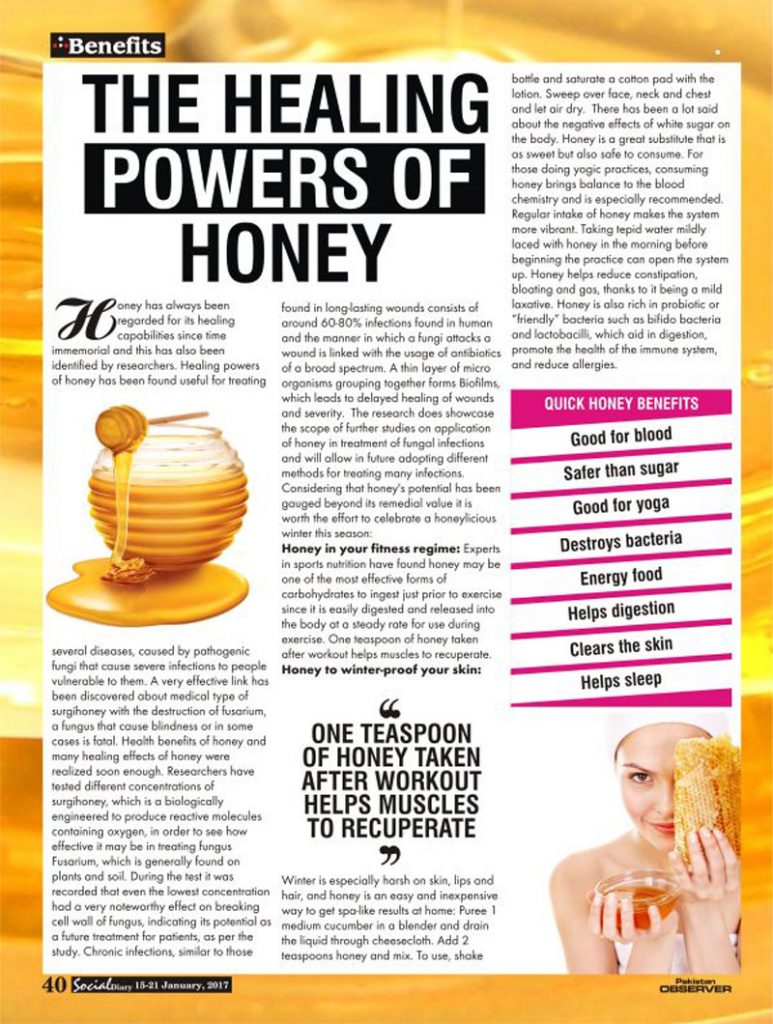 Exploring the many talents of Hira Mani