The Quaid-e-Azam House museum- a walk down memory lane.

by admin
in Travel Diaries
Reading Time: 3 mins read
0
Share on FacebookShare on TwitterShare on whatsapp

The Quaid-e-Azam House, also known as “Flagstaff House”, is a museum dedicated to the personal life of Quaid-i-Azam Mohammad Ali Jinnah, the founder of Pakistan. Located in Karachi, Sindh, it is the former home of Jinnah, who lived there from 1944 until his death in 1948. His sister, Fatima Jinnah lived there until 1964. Social Diary’s Editor-Sadia Zahid Malik, took a tour of the Museum…

The house was named Flagstaff House as the British Indian Army rented it and allotted it to senior officers including General Douglas David Gracy, who later became the second commander in chief of the Pakistan Army. The place was purchased by Quaid-e-Azam in 1943 at the cost of one lac fifteen thousand rupees from its Hindu owner. The magnificent building was acquired in 1985 by the Pakistani government and conserved as a museum.

The place has been kept clean and pristine by the housekeeper- an old man dedicated to preserve the house till the end. Visitors are taken to the backyard of the house, where he talks about the architectural design. The house has servant quarters as well as a horse barn which was later converted into a hall for guests. Talking about the landscape, the housekeeper details on the landscaping; the garden has been renovated several times while the trees have remained untouched. Opposite the back entrance door is a small room, now an administrative office, but originally used as the kitchen. It was a personal preference of Quaid to have the kitchen outside the house.
Once inside the house, the focus switches to Jinnah’s belongings. The father of the nation’s belongings were restored to their original state in 1993; photographs, ornaments, furniture, out of which an old wooden chest with a glass door is the most prominent. The crockery displayed in the chest were gifts to the Quaid by the governments of Japan and China. The living room contains wooden furniture, including a long table used by Quaid-e-Azam and Fatima Jinnah when they held official meetings. A map of Pakistan made up of broken pieces of glass hangs on the wall, a gift from Rafique Motiwala- a businessman from Bombay. An old telephone set given by the government of America is placed on the side table while a figurine of a German shepherd dog sits atop a shelf. A pencil sketch of Fatima Jinnah, made in 1963 by artist Sarah Ikhlaq, hangs on the wall in this room.

The next part of the tour is upstairs, with the wooden staircase adorned with family photographs of Fatima Jinnah and the Quaid’s daughter Dina Wadia on the walls. The upper floor, where Quaid-e-Azam and Fatima Jinnah lived, is divided into two portions. Quaid-e-Azam’s room has a collection of books, clothes, shoes and a cane that he always carried. A copy of the Holy Quran, wrapped in a silver cover with the Quaid’s name imprinted on it, is placed on a wooden book holder.

After Jinnah’s room is Fatima Jinnah’s room. She started residing in the house in late 1948, after the death of her brother. She lived there for 16 years. Every item in the house is an integral part of history and evidence to linkages between the Quaid and prominent figures of the time. A framed sketch of a lantern is a prime example of this- the final draft of the campaign poster for Fatima Jinnah when she contested the 1965 presidential elections. After this, she left Flagstaff House and moved to Mohatta Palace.

One can’t help but be in complete awe of this magnificent house with historical artifacts and belongings of our beloved founder of the nation. Unfortunately, the responsibility of preserving and keeping the house in perfect shape is entirely upon one man- the housekeeper, who claims that the government has completely given up the task of preserving the museum and provides a measly sum every year to take care of the house. Just as the grand Mughal architecture has eroded with time due to negligence of leaders, it is the responsibility of every citizen to ensure that the same doesn’t happen to the Quaid-e-Azam House Museum. Historians and the general public alike should definitely visit the place. 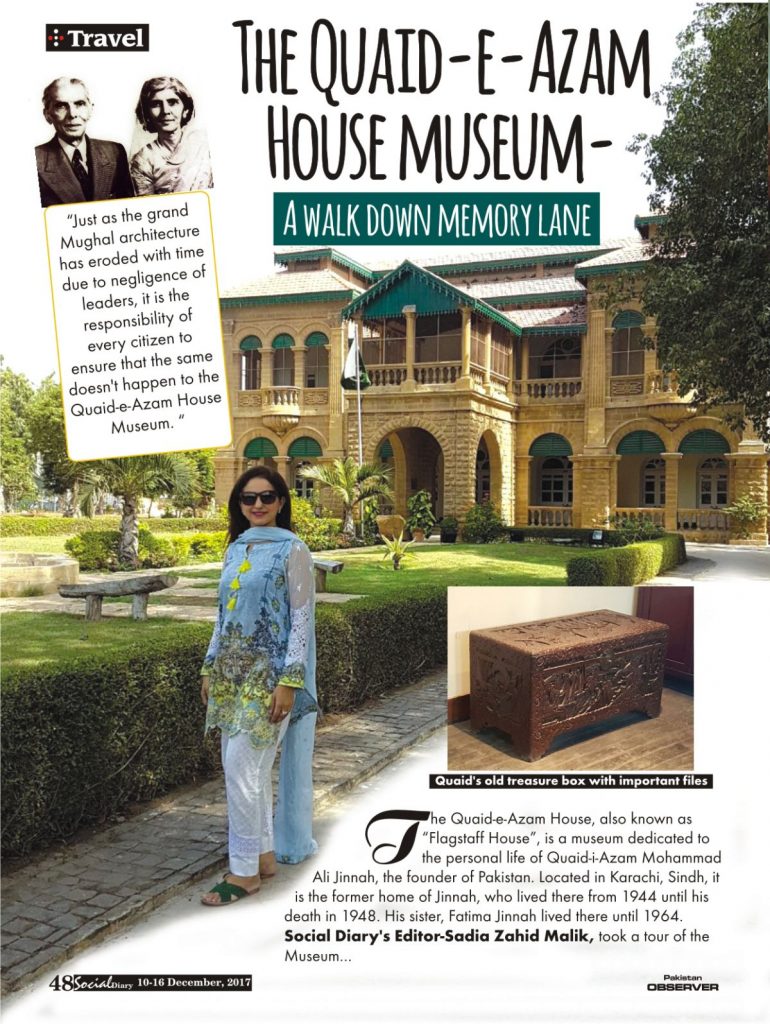 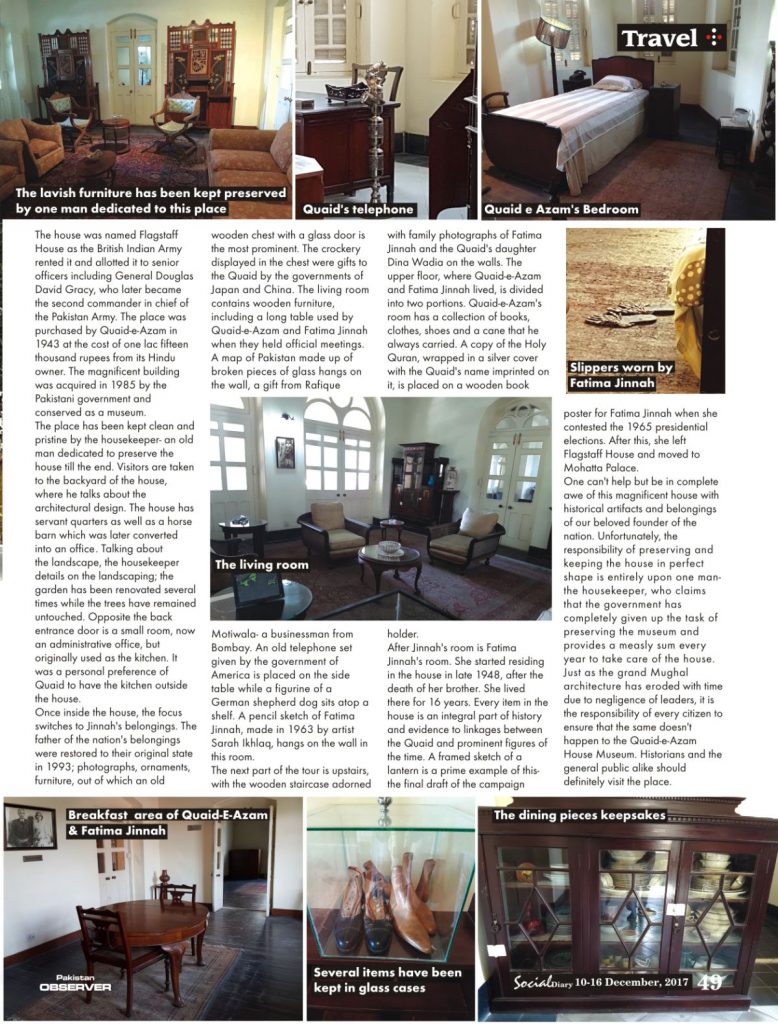 Bits & Pieces on the life of Jiya Malik