by admin
in Travel Diaries
Reading Time: 2 mins read
0
Share on FacebookShare on TwitterShare on whatsapp

Good news for all of you history buffs out there. Your quest for ancient ruins, sacred wonders, and world-famous landmarks need not be squandered at an all-inclusive resort. It’s not as challenging as one might think to choose a vacation destination with historic highlights. We have put together a selection of some fantastic destinations that offer a great historic holiday.

If you like to lounge on a stunning beach between your explorations of ancient Mayan ruins, Mexico’s Yucatán Peninsula offers a perfect blend of both. In Cancun you’ll find the world renowned ruins of Chichen Itza and Cobá. And in nearby Merida you can follow the Puuc trek and explore the many Mayan delights such as the Uxmal ceremonial grounds and pyramids.

Athens is the premiere site of Greek myth. Here, you can trace the origins and stories of Greek immortals like Zeus and Poseidon. As one of the world’s oldest cities, you’ll discover history galore. Start with the Acropolis of Athens, explore the famous Parthenon, check out the seats at the Old Olympic Stadium, and if you have time for a dip in the gorgeous azure waves, it’s a pure bonus.

If Indiana Jones inspired your adventurous side the city of Petra, scene of the fictional hero’s Holy Grail quest will certainly get your whip spinning. Petra sits carved into a canyon in Arabah, Jordan, where, as the real story goes, was uncovered in 1812 by a Swiss explorer. Today, Petra is among the New Seven Wonders of the World.

It should be no surprise to find Rome on this list of top historical cities. Not only is it the birthplace of one of the world’s most influential civilizations; it’s also the site of ruins of ancient Rome such as the Colosseum.

Machu Picchu is all that remains of the lost Incan civilization. You can explore the “Lost City of the Incas” along with hordes of other tourists. So it’s best to plan a day trip and arrive early to get the biggest bang for your efforts.

A reminder of the emperors who once ruled this vast empire, Bejing is home to a plethora of Asian culture and influence—such as the Forbidden City, the Ming Tombs, and the Great Wall of China, which almost fully-preserved, dates back to the glorious Ming Dynasty.

A stunning example of Khmer architecture, the Angkor Wat Temple dates back to the early 12th century. Constructed by Cambodia’s King Suryavarman II as the state capital, the temple holds many unique bas-reliefs (colonettes carved in sandstone) and devatas (elaborate Hindu carvings of deities). 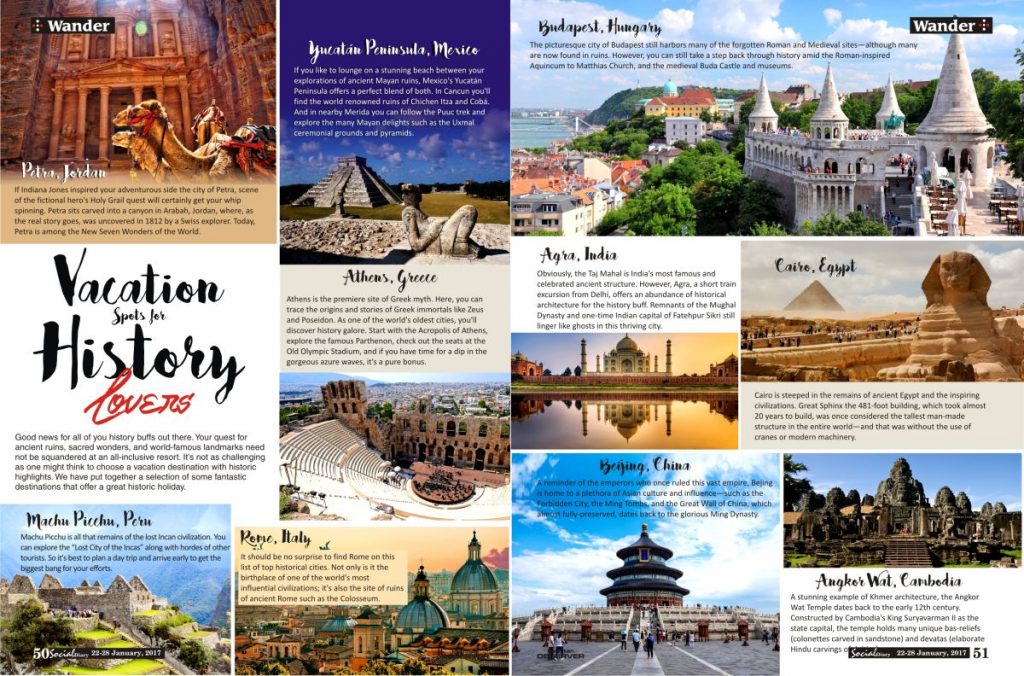