By: Novera Majeed
There’s nothing quite like a Sheldon Cooper quote from The Big Bang Theory. After all, the character wields his mastery of the spoken word as easily as he drops all those lesser minds stinking up Caltech down a few pegs. He just knows the precise phrasing that so perfectly sums up our current state of mind, and it comes so naturally to him. As much as we hate to admit it — you know, because he constantly likes to throw this fact in everyone’s faces — we can all learn a lot from this man.

Though he may be socially inept, barely understands the opposite sex, has no idea what a “Britney Spears” or “Madonna” is, and values the latest Halo upgrade over love, he’s managed to transform himself into one of the greatest scientific minds. We guess we should have expected this from the guy who is able to whittle down the art of “making friends” into an easy-to-navigate flowchart. In terms of succeeding in life, he has us all beat. Though he hasn’t written a self-help book (that we know of) to guide us all in our own paths to greatness, We’ve culled the past seven seasons of The Big Bang Theory in the hopes of learning all we can about life from this brainiac. And here’s what we’ve come up with.

Be Blunt
Often times the best way to get something across isn’t to sugarcoat things like Leonard or Raj. Like Sheldon, sometimes you just need to rip the band-aid clean off, even if it means ripping your body hair out by the roots. Hey, it works.

Sheldon sees no use in hiding behind lies, even harmless white lies. According to his actions, he only knows one way, which must make it the right one — stay honest and true, no matter who might get hurt. A little emotional pain here and there will make you stronger.

Sheldon is not the aggressive type of person. He’s more apt to slay your feeble mind, as opposed to actually slay you. But he also knows the value of fighting back and standing your ground. If someone besmirches your good name (or your Batman cookie jar), it’s time to heat things up.

4. Chamomile Tea Is the Path To Relaxation

You’d be hard-pressed to find something more soothing in your hour of need than chamomile tea. It’s Sheldon’s life essence. When he turns into his sinister and sour self, this nectar of the gods will get him back to tip-top shape with a few licks of his tongue.

I know, you’re such a good friend. That means everyone is going to come to you and vent their problems, looking for the best possible advice from their buddy. However, you must know when to draw the line. A simple interjection of one of Sheldon’s various “I don’t care” sentiments should do the trick when you just want to be left alone.

6. Don’t Cry For Me… Cry For Everyone Else

If you need a good pep talk… well, don’t go to Sheldon, but, rather, learn from his actions. He holds himself in such high esteem because it’s a matter of fact. If you start to believe the same of yourself, pretty soon that, too, will be considered as true as the sky’s blue color… or that “geology is the Kim Kardashian of science.”

This one is particularly hard to swallow, but, if you want to achieve the level of enlightenment from which Sheldon is looking down on us all, sacrifices need to made. That includes nixing any and all human contact, including coitus. Who needs to feel the touch of another human being when you can feel the satisfying sting of Halo 3’s enhanced weapon systems? 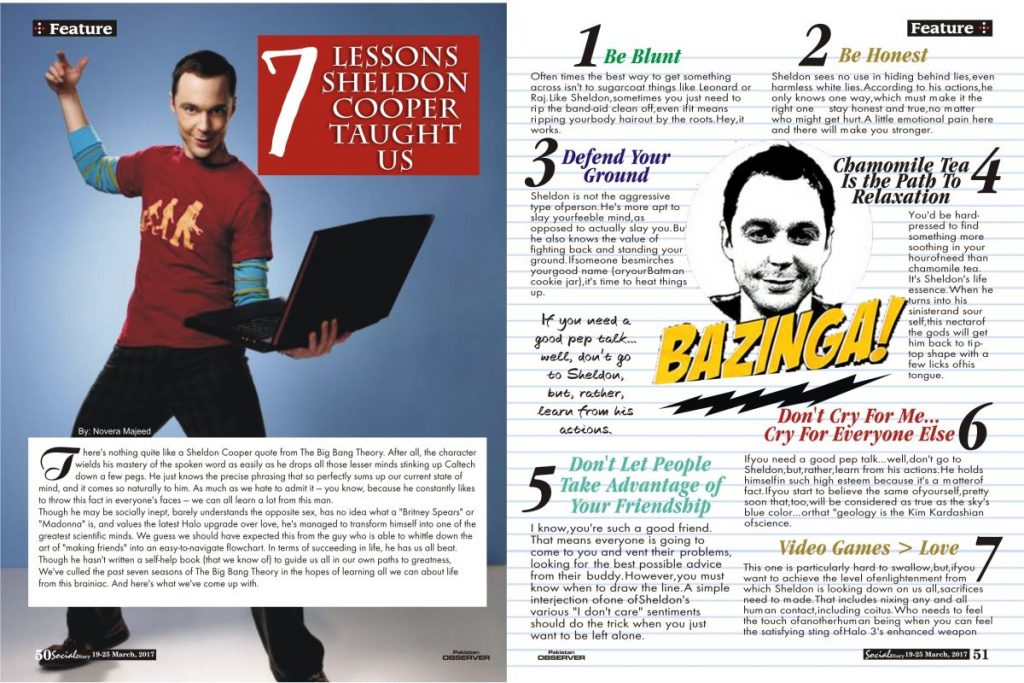 Rock the summer with your fashion game