“A magical place of rich history and culture…”

Venice sights, in a word, are magnificent. There is no such place in the world that can be compared to Venice. This amazing floating city is situated on more than a hundred islands in the marshy Venetian Lagoon, on the northern part of the Adriatic Sea. Traces of the glorious history are visible at numerous Venice sights, including marvelous Gothic and Byzantine churches and palaces. Many places to visit in Venice are accessible only by boat or gondola, but that is part of the city’s peculiar charm. Don’t delay too long your visit to this unique city, since Venice is sinking 1-2 millimeters each year (or maybe that’s just a myth to keep the tourists coming!). If you, however, get there in time, here are admired places of interest every visit must include.

Grand Canal
Among the 150 channels that intersect the city, the Grand Canal is the largest and major waterway in Venice, over two miles long and 30 to 90 metres wide. It is actually the busiest street in the town, if you can imagine boats instead of cars, and water instead of asphalt. The Grand Canal connects St. Mark’s Basin with a lagoon next to Santa Lucia railway station. Many remarkable buildings built from the 13th to the 18th centuries can be seen along the channel. Take a gondola ride through the Grand Canal for a true experience and see many of the Venice sights.

Bridge of Sighs
One of the Venice sights that make this city so romantic is the Bridge of Sighs. This amazing enclosed bridge made of white limestone, nowadays elicits only sighs of delight, but its history suggests that it wasn’t so at the beginning. Since the bridge connected the interrogation room in the Doge’s Palace with the old prisons, one of theories says that prisoners used to sigh at their last view of the beautiful Venice through the bridge window before they were taken to their cells. Apparently, Lord Byron gave the name to the bridge in the 19th century. However, if you kiss with your lover in gondola under the Bridge of Sighs during sunset, you will be granted eternal love. Is it only a local legend, commercial trick or something else? Who knows, but why not do it anyway?

St. Mark’s Square
Piazza San Marco is the largest square in Venice. The square was originally constructed in the 9th century in front of a small chapel that would eventually become the famous St. Mark’s Basilica. As the central point of the city, St. Mark’s Square has always been the location of government and other important buildings. Among several recognizable Venice sights that are placed around the square, the impressive St. Mark’s Basilica with its 100 metres high bell tower will probably be the first to draw your attention.

Arsenal
Once the largest shipyard in the world, today’s Arsenal building serves as a technology centre and a naval base. The building has been famous for its amazing Porta Magna or the Main Gate, which was added to the structure in the 15th century. Two remarkable lion statues guard the ornate entrance to the Arsenal. The building is usually not accessible to the public, except during the Biennale, when some parts are used for exhibitions and is open to visitors.

St. Mark’s Basilica
The main city landmark, St. Mark’s Basilica is one of the loveliest Venice attractions. It is considered to be one of the most representative monuments of the Byzantine style in the world. The Basilica boasts an ornate, luxurious exterior that includes numerous mosaics and statues. The moment you step inside, you will be even more stunned by its size and magnificent details, like the carefully designed marble floors and gilded mosaics on the walls and ceilings.

St. Mark’s Campanile
The imposing, almost 100 metres high bell tower, called the St. Mark’s Campanile, stands independently in front of the Basilica of St. Mark. The tower has a plain bricked structure with belfry that houses five bells. Although quite simple and without ornamentation, the Campanile dominates the St. Mark’s Square by its size and is one of the most recognizable Venice landmarks. If you want to experience the stunning view of the city and Lagoon, take the lift to the top.

Rialto Bridge
The oldest and the most known of the four main bridges that span the Grand Canal, the Rialto Bridge is usually crowded with tourists. It is located in the very heart of the city and connects the districts of San Marco and San Polo. The bridge consists of three walkways covered by a portico with shops on each side. The Rialto Bridge is one of the top Venice attractions and is included in almost every tour of the city. Arm yourself with a camera to capture this unique bridge from the gondola or water bus.

Gondola
The instantly recognizable symbol of the city, the gondola has been Venetian form of water transportation for centuries. Once used as the main means getting about the city, the gondolas are nowadays used mostly as sightseeing boats for tourists. Gondolas are extremely popular with couples who take slow journeys through the most romantic city in the world and sometimes even get engaged during the ride.

It is an architectural wonder; an ideal romantic spot for lovers and those who are about to fall in love; the city of gondolas and serenades. Does Venice hit your romance spot?

“One of the Venice sights that make this city so idealistic is the Bridge of Sighs. This amazing enclosed bridge made of white limestone, nowadays elicits only sighs of delight, but its history suggests that it wasn’t so at the beginning…” 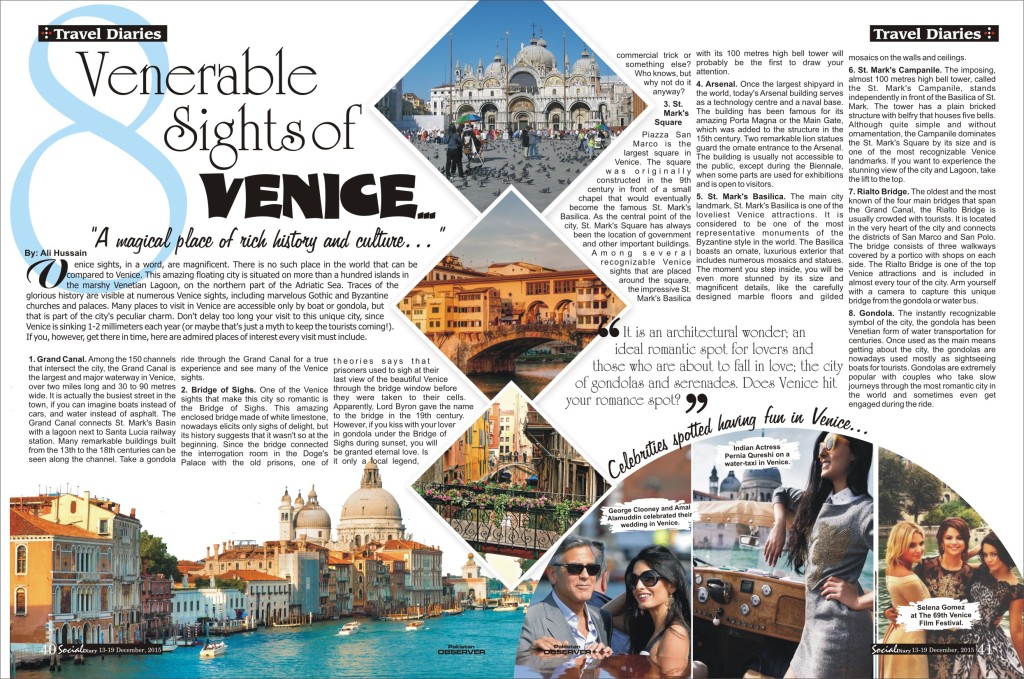 Detox your system with cleansing BROCCOLI