The heartthrob actor who took the entertainment industry of Pakistan with a blow!

From starting his career as a VJ to giving blockbuster drama serials with some of the leading Pakistani artists, Adeel Husain has ruled the hearts of many. Keep reading as Social Diary finds out more about the actor in this exclusive interview.

Well, I knew I wanted to balance my time between acting and working behind the camera. Radio was a good gig that gave me a lot of practice with vocals and speech and a specific kind of performance energy. I was never interested in being a VJ or hosting. As the acting jobs I did progressively started doing well, I pulled out of radio in order to focus on acting, photography and behind the camera work.

Yes before I was ever in a scene in a tv play I knew I wanted to be a director as well. But I didn’t want to get too rigid on the idea and wanted to discover how good I really am or cant be or perhaps maybe I would end up being terrible. I wanted to discover it for myself. I was doing photography and drawing / painting before I ever hit the screen as an actor. I have a strong visual arts background.

Both. I was very happy and content with the success curve that went through a string of memorable and well received plays leading up to the two movies in 2016. I definitely wanted to spend more time with family, take some time off and consolidate. As actors we are always looking for the right role, but I also wanted to start momentum in developing projects with some friends and colleagues.

Starts with the script. You read it over and over and you try to find the character’s identity , personally traits. It’s a process of discovering the character as conceived by the writer and adding your own acceptable layers to hopefully make the final outcome more believable, layered and interesting. Ive been doing it for a while now but I don’t have a set methodology, there is always something new to discover in the process.

Lots of them, shooting in Colombia university, the hilarity that happens in the middle of serious scenes. There a lot of funny incidents including the water fights during ho man jahaan or shooting the song in the convertible of Dobara Phir Se. I find the whole process very memorable. And like to experience the work deeply from the perspective of the character and myself.

Many. Daniel Day Lewis, Daniel Craig, Christian Bale, Tom Hardy Tom Cruise, Moin Akhter, Amir Khan, Naseeruddin Shah  to name just a few. We are living in an era of learning from everyone so I don’t have specific role models. I look upto good work coming from a myriad of sources.

Its growing fast, its growing in many different directions like a jungle. Hopefully we will continue specializing in a multitude of genres and keep giving our audience a healthy variety than some repetitive formula. There is definitely a struggle of identity and repute but with a honest process of self criticism we should get there.

I love it when as an actor you can serve the story completely, do the scene, hardly have any memory of how it was done and then come out of the process and look at it working. Conversely what is bothersome about acting is that It needs a whole bunch of other amazingly talented people to make the whole thing come together, its not like you belt out an epic monologue on stage and it works. You have to work in tandem with the lens and the visual aspects of storytelling which ofcourse is dominated by concerns of camera.

Im very excited to see the new generation of stars. Would be great to work with Shaz, Sheheryar and Ali Kazmi again. Mawra, Kubra , Iqra. If the actors work for the story, there’s no limit to the permutations. Im open to working with whoever is professional and passionate. I would love to do a feature with Sanam Saeed.

I try. Its an occupational hazard.

I love photography. And it is something I do for myself, to feed the aspiring director in me. Hopefully it’ll play a big role in me working successfully with cinematographers when I eventually direct. Its something I do, I don’t separate it in terms of creating a tangent career as a photographer. Lots of directors are superb photographers. Its something I love and want to keep on getting better at it even if nobody pays me a penny for it.

Golf, motorcycling, reading, videogames and whatever I can fit in during bouts of travel.

Do your thing. Face the consequences. Learn.

Love you all and a big thank you for being so fiercely loyal and loving.

Somebody on my PR team.

Sapiens: A Brief History of Humankind by Yuval Noah Harari

Being the role, serving the story

Both as required but prefer to remain a morning person. the struggle is real.

Im not that picky

Ill let you know when ive done it 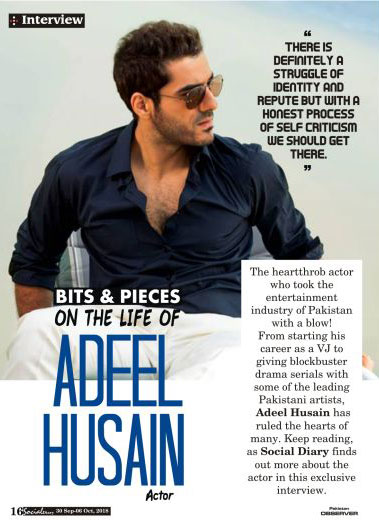 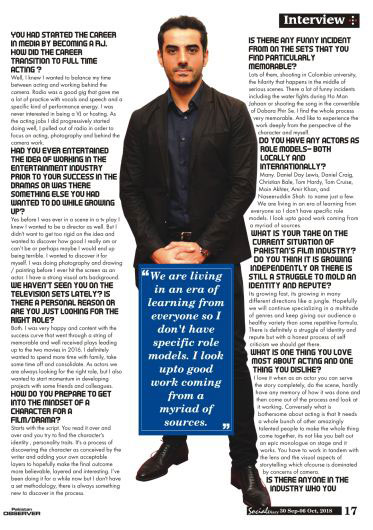 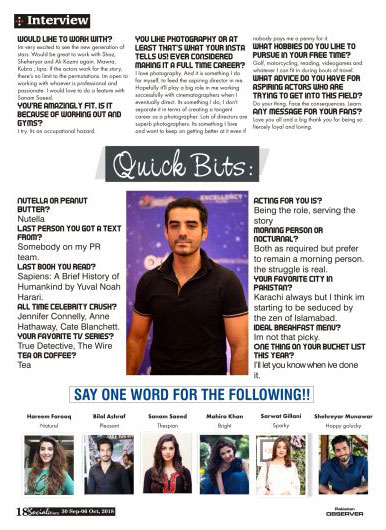