Bits and Pieces on the life of Aditi Singh- Actress

Great talent knows no bounds- a fact which Aditi Singh strongly believes in. Hailing from the other side of the border, she will be debuting in her first Pakistani film in ‘Wajood.’ Social Diary presents an exclusive interview with the enigmatic Aditi…

I am this girl who has always dreamed of becoming an actress since childhood. I hail from Mumbai and I was born in Delhi. My family background is completely filmy- with me being the third generation of people in the industry of films. First was my grandfather who made a lot of films and lived in Lahore, second was my father who made a lot of films with Amir Khan and Madhuri Dixit and also my uncle who is a very famous actor in Bollywood- Aditya Pancholi, he has done a lot of remarkable work there.

I stepped into the field of entertainment before I even learned how to walk because my entire family was from the film industry and everything we ever spoke about, revolved around the industry. I wanted to become an actress since I was a child and even when I was growing there was nothing I ever thought I would do except acting and that choice has never changed. It was something I had always wanted to pursue and my parents have been very supportive in this journey of mine.

I was approached for Wajood when Sir Sheikh was in Mumbai promoting Happy Bhaag Jaye gi so somehow he had come across my photographs and he apparently thought I am perfect for the role. So there was a meeting held; me and my mother had went to meet him and once we heard the script and I heard the song that is mine in this film- there was no looking back.

My thought process behind the roles I choose is basically I see how impactful that role is and challenging. Because my mindset is set in always wanting to do something different, giving my role more of a personal touch so that I can bring something new to the screen with my character every time. What makes me partial towards the script is basically how impactful my role is in the film so if I feel that in a script my character is very important and pivotal in the film, then I will always be partial towards the script.

In my opinion, what makes or breaks a film is how proportionately the content is laid out- for example how much entertainment is for the masses how much entertainment is for the classes, and for movie buffs. This mixture makes the film and if it is all over the place, it breaks a film. So I think this is what does the job and a good cast is of course important because they are the ones who attract the audience to the cinema but what sustains the film is completely the right mixture of entertainment.

Sir Sheikh has been the main rock for me while preparing for my character in Wajood- funnily his name also the Rock in the film, actually. But all I did before every shot I gave was that I told myself that you are a millionaire a billionaire and you have to walk like the world is walking behind you and I think this would help me get into the character in a minute.

I honestly don’t believe that there is any difference in the filmmaking. It is uniform around the world; what differs in every situation is the person you are working with. Every person has a different style- like I have worked with different people in Telegu and now I worked with Sir Sheikh; it is different because Sir Sheikh has a lot more royal approach to his filmmaking techniques- the location, the clothes etc.

Yes the transition to Lollywood has been easy but yes I have been receiving a lot of backlash on social media. Honestly it is not about coping with it but conditioning my mind (which my mom has been helping me a lot with) because I was chosen for this script because Sir Sheikh saw something special in me regardless of my nationality along with me so there are a lot of people saying that “did Pakistani girls die that there was a need to bring in an Indian girl?” but all I think is that these are the same people who are going to buy the ticket and go watch it. And when they do go to watch the film, they will get an answer themselves because regardless of the nationality, it is not related to when someone is taken into a film so I think my work is the answer to all the people backlashing at me.

Working with the three biggest legends of Pakistani cinema was an honor for me. They say that when you want to be the best, you learn from the best- especially under the guidance of Sir Sheikh, I learned a lot as he is simply the best.

I was supposed to jump into a pool and it was minus 2 degrees and sunset time. I was supposed to get into a pool wearing a thin red gown and when I came to the pool everyone huddled around the screens saying that Aditi won’t be able to do it, how will she do it? And then there was a big splash as I jumped into the pool and everyone turned around, looking at me shocked! That was really funny.

The cultural aspect of the industry brings the two countries together because we are very close together in terms of culture and it does help promote peace because when you see that bringing the talent from both sides of the border can create great art, it creates bridges of understanding.

There are a few projects lined up and InshAllah once things get materialized I will definitely be updating everyone on it.

My message for the audience is to fasten the seat belts of their cinema seats because this flight is gonna be one hell of a flight.

The untold story of Rekha

Say one word for the following: 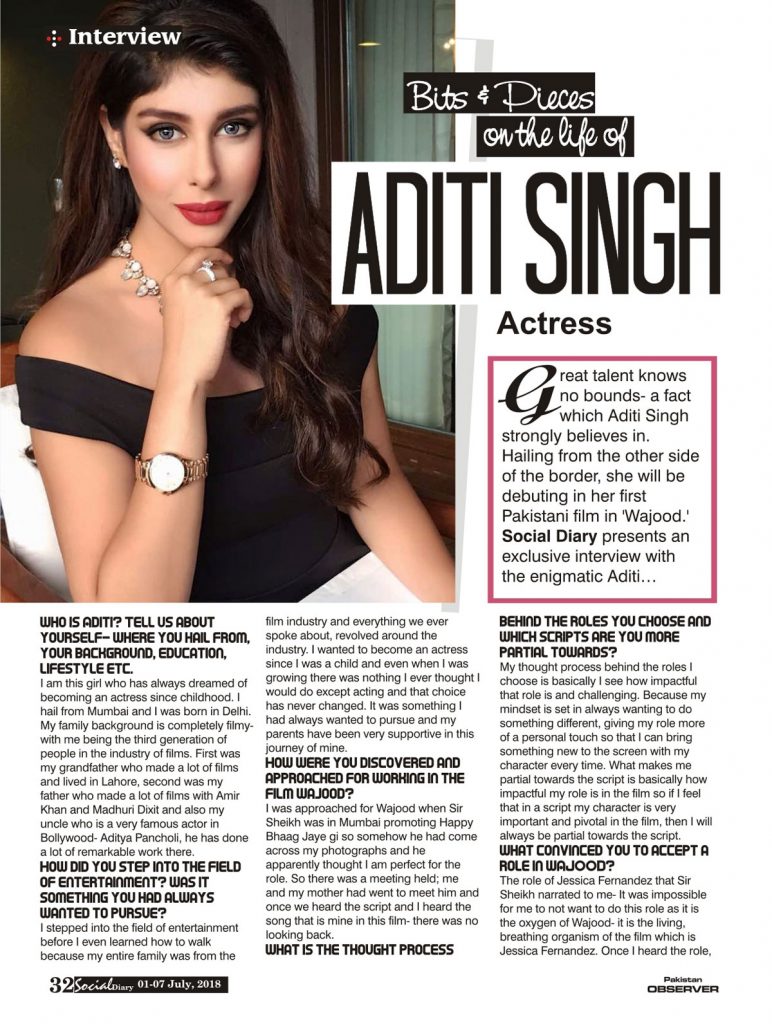 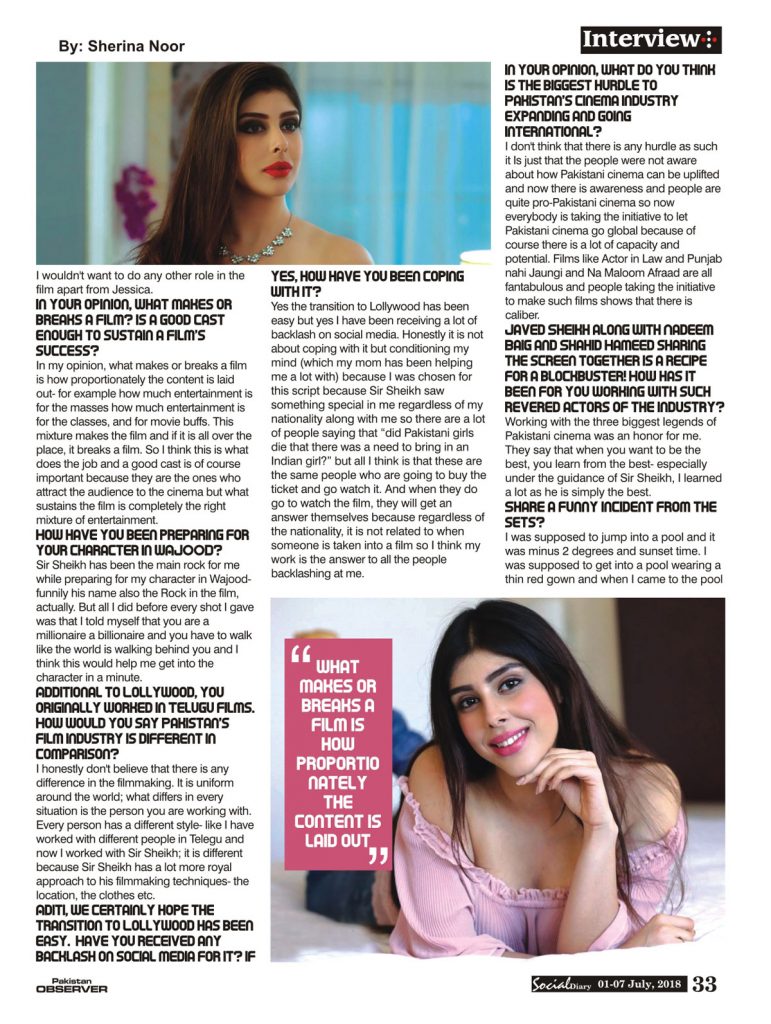 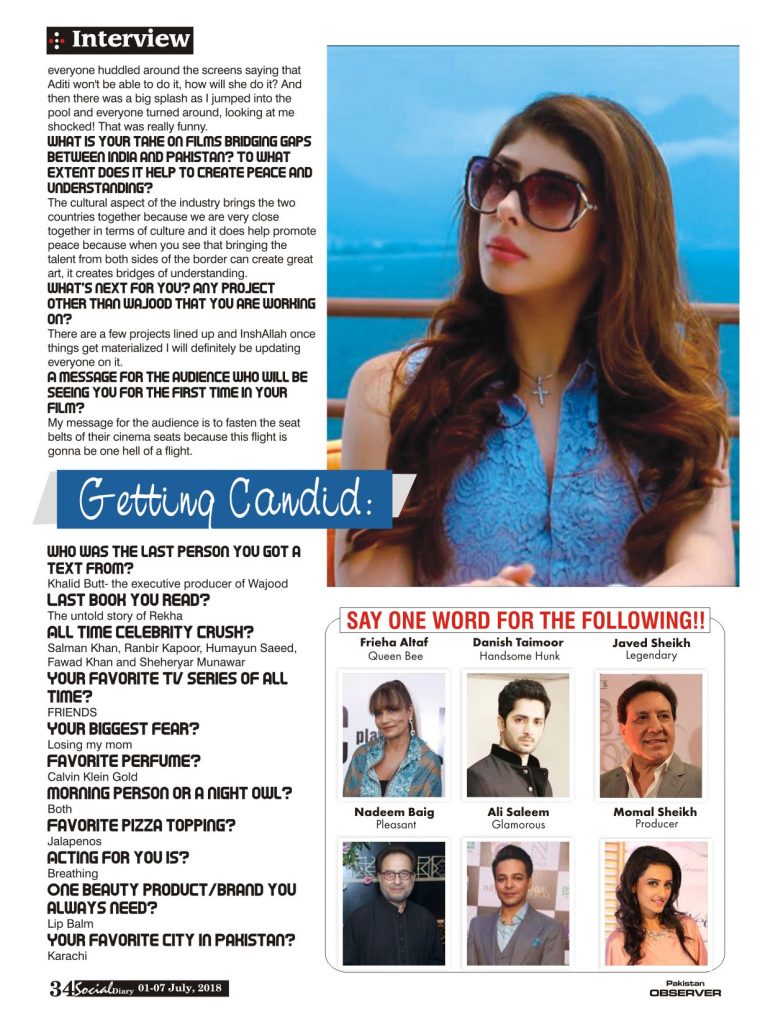