Fun Loving, bubbly and breathtakingly beautiful Sanam Baloch spoke to Social Diary on a lot of aspects regarding her life. She has proven that her acting is just miraculous and with her hosting skills she lights up the mornings of massive audience. Her performances in Daastan & Dur-e-Shehwar have been admired a lot. Last year she also played Marium Mukhtar in a telefilm by the name “Aik Thi Marium”. She had a lot of cool stuff to share with our readers, let’s read on…
What got you into the field of acting?

Acting is something that just happened to me. I never wanted to be an actor. Although I was quite long-winded and convivial since my childhood but being an actor was never my dream. Even my first play Kaalak, I was coaxed to do it and I after that I thought that’s it – not anymore.  I’m sure you would’ve heard about overnight success stories. People often talk about overnight success stories and this was indeed one of them for me. The telefilm got aired in the night and in the morning I was flooded with the huge feedback of calls and messages and what not.

What’s you favorite genre when it comes to acting?

Everything I can relate too. I’ve done a lot of drama particularly but comedy has always been something I look forward to doing.

What type of role would excite you the most and you would take it in a blink of an eye?

Again something I can relate to in some way. By relate I mean a role that has some depth in its sequence. Baano was one of the roles, Kiran and Marium Mukhtiar you know. A story of someone inevitable, a journey that can bring a change I guess. Don’t you think it was quite necessary to bring the story of Marium Mukhtiar on television for the people, to aware them who she was. It was, right? She was a national hero. Such roles always excite me and to be honest these all were the roles I took in a blink of an eye.

What did you do with your first pay cheque?

I don’t even remember. But yes I was very sterling kind of a person since my childhood. So when I was offered the drama, I had no car but I told the producers that I’ll come on my own car and they don’t need to pick me up. Without much ado I actually rented a car back then and used to drive that to the sets and guess what all my pay cheque went on to pay the rentals.

What do you enjoy the most acting or hosting & why?

To epitomize, both. Acting is my passion and hosting is my work and I try to do everything from my heart, whatever it may be.

If you had to pick three things from a grocery store, what would you take?

This is a tough one, hahaha but I’d probably go for Davidoff Coffee, Milk and Chocolates.

Any funny incident from the sets that still makes you laugh?

From Kuch Pyaar Ka Pagalpan, there’s a scene where I go and slap Fawad for snapping my trust and all that, in the middle of the road. I’m barmy about my work and so is Fawad , ready to give 10 shots in a row without whining about it. Well since this was an intense scene, during the shots my tone was a bit erratic and we had to do the entire scene a couple of times again – and trust me on this, he didn’t say a word … so yes, such things, giving shots in the middle of the road again and again was I still think funny.

Do you get along with your co-stars easily?

Well, I try. But this is a two way process right.

Whenever you feel down or sad what do you do to make yourself feel better?

I go to my mother’s place, meet some friends and off course unwind with a good pedicure and manicure maybe.

Any character played by you so far which you think is close to your personality?

If you want me to answer it honestly; None. Off course all the characters may have a certain percentage in the kind of person I am but I don’t think I have played a role so far that can relate to me personally to a great extent.

If you were stuck on airport where your flight was late what would you do to kill time?

This happened to me last year in summers’ when I was off to Thailand. I usually keep myself busy in conversations on phone and also indulge with the person I’m travelling with. Also reading a book can be a good option.

What’s the best advice given to you by someone?

How do you stay fit, do you follow any diet regime?

I go to gym – like two or three times in a week. And ahhhh… as far as my diet is concerned I don’t take junk food and soft drinks is out of the question for me. Once a week for Junk Food and Burgers when there’s an irresistible craving, otherwise I eat everything but in a less quantity. Everyone clearly asks me not to reduce any more weight and be a skeleton skinny.

Any drama project you are currently working on?

I wouldn’t really talk about it right now. But, just to live up to the puffery post Ek Thi Marium, I have a script I’m working on but I’ll not like to delve much into it before things get finalized and we go on floor.

What’s your idea of a good human being?

We all know what is expected of us but we don’t do it. We all can distinguish between the good and bad, we’re well aware but still we go for the bad path and when I think about it all I realize is that we’re the weak people compelled with the things, we’ve made ourselves – the non living gubbins.  We all need to revamp our destinations. So, I think a tolerant person, open to possibilities and naïve behind or at persons’ face is a good human being. I know there’s no body perfect in this world, but we can try for perfection in some way. No?

Is there any song that has been stuck in your mind for a long time now?

Nawazishein Karam by Shuja Haider also a couple of other songs. Makeba by Jain, I keep falling, also The Greatest by Sia. Yes!

What’s your motto of life?

What would be your advice to your 20 year old self?

Where do you see yourself 5 years from now?

Still doing the morning show, working on film and maybe running for elections, just kidding.Haha you know I always wanted to be the Prime Minister of Pakistan since childhood. So yeah, I don’t plan things in life, let’s see where the waves take me. Learning and doing better is a never ending process. Right now at this particular frame of time, I’m just thinking to go with the flow and be a maestro at whatever I do. I look forward creating a new wave in popular culture that builds on our social identity through the exploration of our home-grown and inherited art forms.

A few words for your fans out there….

Thank you so much for your love. Work hard, keep your intentions true and never compare and envy others. Let your work speak for yourself!

Who was the last person you got a text from?

Misery a Novel by Stephen King. Took me months to finish it but my God. Wow.

Your all time celebrity crush?

Your favorite TV series of all time?

How to get away with Murder. Haha not a TV series person at all.

Watching my own dramas and work on television with someone besides me.

You spend more of your money on?

Shopping. I’m quite of a shopaholic person.

The One Desire by Dolce and Gabbana and Always Red Femme by Elizabeth Arden.

Morning person or a night owl?

Next Question. By the way I host a morning show, for God’s sake!

Pepperoni or just the cheese lover works with me.

Acting for you is?

One beauty product you always need?

Your favorite city in Pakistan?

How much time do you spend on social media? 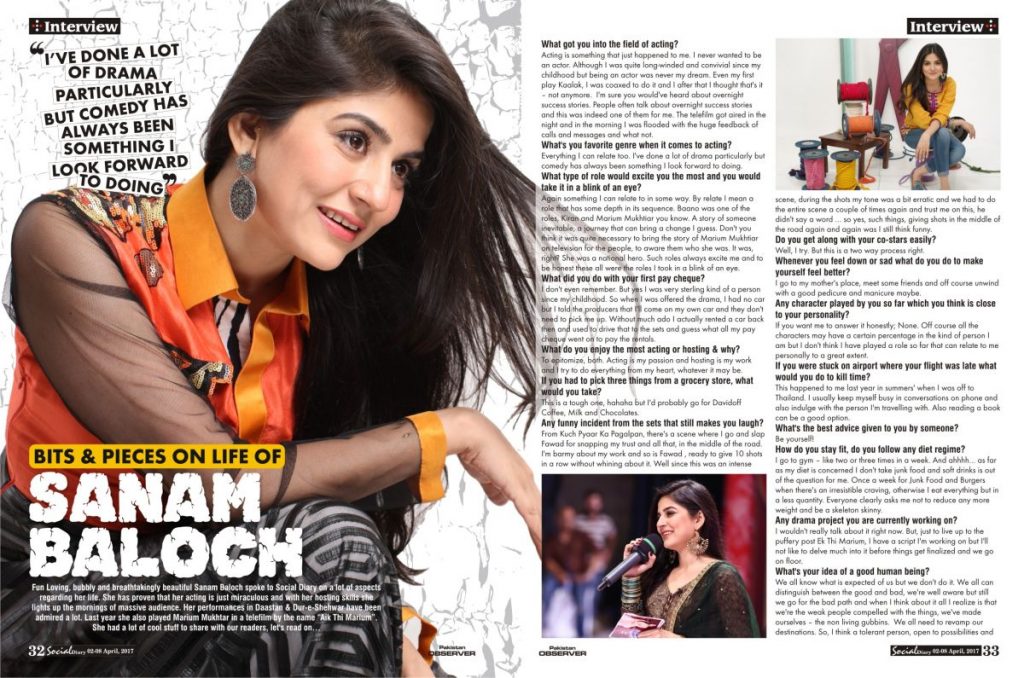 Say one word for the following: 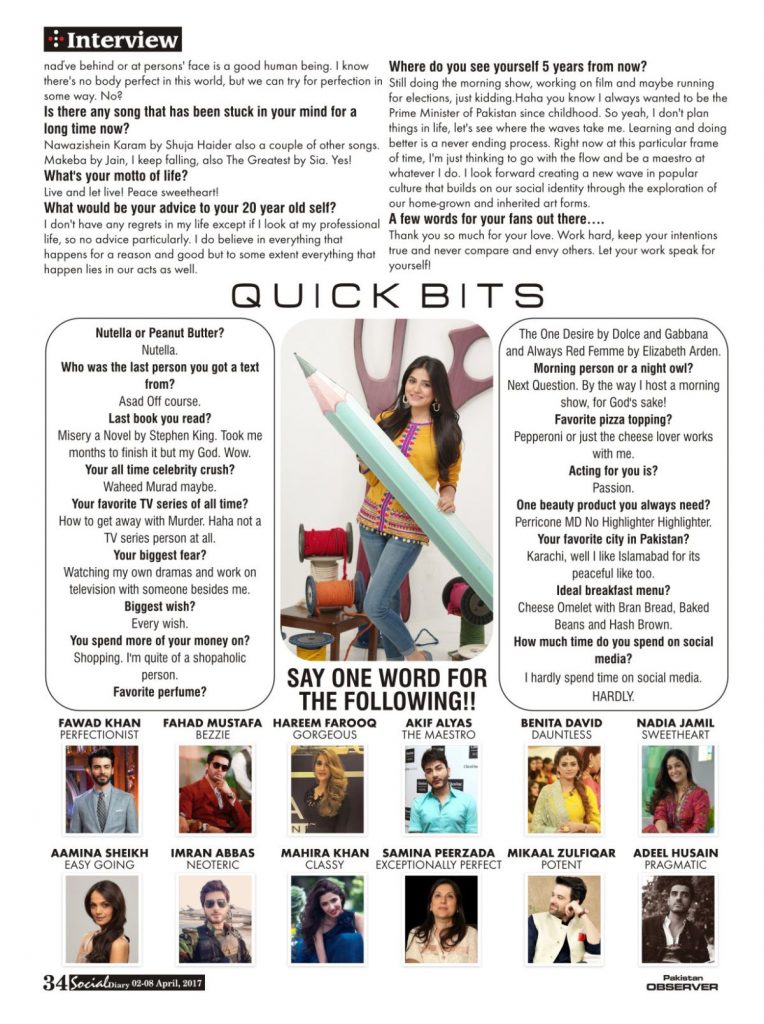