Bits & Pieces on the life of Zarrar Khan

For Social Diary, the actor who captivated us most in the movie ‘Verna’ was Zarrar Khan. With a bold aura, he really made his presence felt on the big screen. With an acting career that was put on hold to pursue new things, we talked to Zarrar about his phenomenal come back…

I was born in Kohat, lived in Karachi; we moved a lot within Pakistan because of my family background from Army. I have done my B.Com and currently I am a Banker and residing in the UAE.

It was by coincidence; one of the very famous actors- Mr. Hassam Qazi, he saw me in my uncle’s car show room and he offered me a room for a role on PTV. So I started my career from PTV. So my first play’s name was ‘Matti ki Moorat’ and no I never wanted to be an actor, I wanted to be a cricketer actually*laughs.*

I needed some space to organize my life’s priorities and look into things from a different angle. Plus, I needed to experience a new lifestyle and career so that’s it there was nothing else, this was my target and I pursued it.

Thank you so much, I loved the compliment, thanks so much for the appreciation. I did not decide to resume, I was approached by Sir Shoaib Mansoor and he wanted me to play this character. So it took us almost one year to sit on that and see how it can work out so that’s how it happened.

Definitely it was amazing and for sure it seems like a dream come true. It was a new experience and a great chance to be on the big screen. For every actor it is a dream to see himself on the big screen and I loved it.

Sultan was quite an exciting character. I loved to live in the character and I am not the kind of actor who copies and pastes another person’s portrayal of a character into mine. I have my own way to live the role and seriously even after two months of the film coming out; I was still in that character and was unable to come out of it. It was thrilling for sure.

No, I cannot remember anything funny but there was one scene which I can tell you about. There was a scene that was really painful; in the last scene, I was tied for almost six hours in a shelf and I could not move. Sir Shoaib said don’t even move and stay there because I have to finish this scene so that was quite painful.

Shoaib Mansoor is a living legend and Mahira Khan is a superstar. It was again a new experience and I learned a lot from it. Sir Shoaib is outstanding- everyone wants to work with him, he truly is a living legend. And Mahira, she is such an energetic woman; whenever you see her, she is always in character and I loved working with her.

Thank you once again! Yes, for sure if I get the right project and the right role then yes I will go for it. I am not stopping my acting career, I love acting and it is in my blood and I cannot stop that.

I have a few scripts on hand but I have not yet decided. Let’s hope for the best, I’m looking for something good because people loved my character in Verna and they won’t see me again as Sultan but they will see me in something better than that.

The best part is that the production quality has improved a lot and the new generation is working really hard and the cinema industry in general is growing. The people, the critical issues and real topics are chosen by the media that touch people’s realities and hearts. That’s a good sign, definitely a good sign.

Normally I am in office from morning till evening so whenever I am free in the evening, I love playing Squash, swimming, playing Snooker etc.

My daily routine- I’m a banker and most of my time is in office, I go for long walks in my free time in the evening, and this is what I do usually. It is quite a complicated life because it is not easy, working as a banker.

Yeah there are a lot of directors right now like Haseeb Hassan. He is a very good friend of mine and he is doing a great job. Nabeel Qureshi is another who is doing a fantastic job. Also Nadeem Baig.

I am very thankful for the support and the love the fans showed, this is a success for me and I promise to return with new and stronger roles. 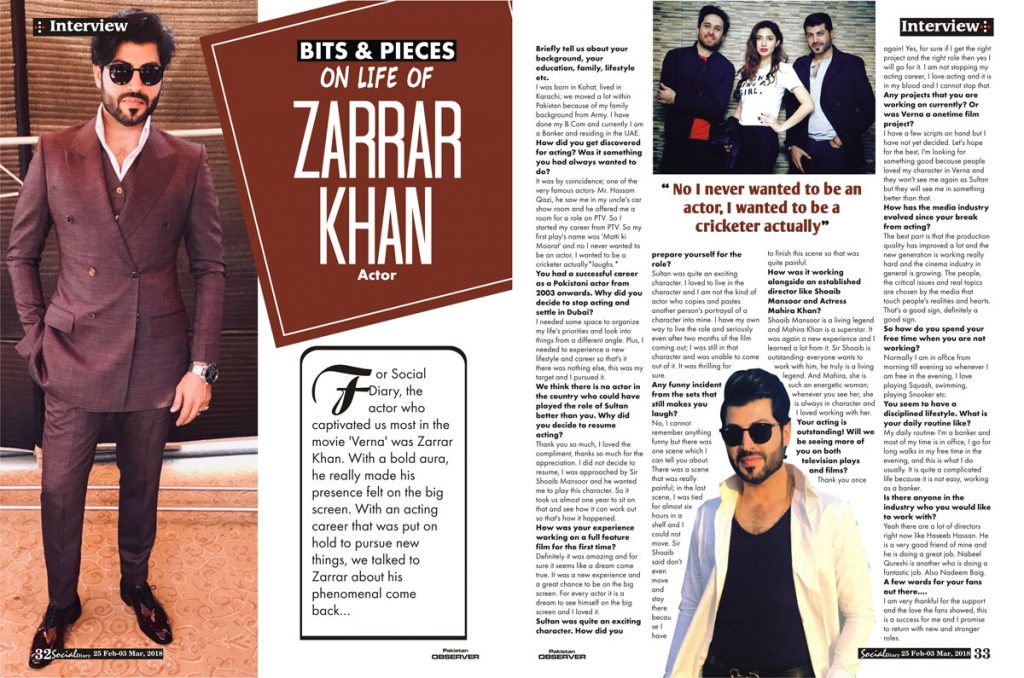