With winter finally here, it is inevitable that we are going to become couch potatoes and stay snug inside blankets. Our body activities will also more than likely decrease and so will our morale to get out of bed and be productive. We’ve all got metabolism, but some people are “faster” or “slower” than others’. And that matters, because the rate at which your body burns calories and converts fuel to energy can also affect how easily you gain or lose weight. It also says a lot about how at-risk you are for diabetes, and how much pep you’ve got in your step. While much of your metabolic rate is determined by genetics, age, gender and body size, there are some lifestyle changes that can, quite literally, speed up the process.

Sleeping in a cool room seems to increase people’s percentages of brown fat — a type of fat that acts more like muscle. In a research involving five male volunteers who slept in climate-controlled rooms with only light pajamas and bed sheets for several months, it was deduced that after four weeks of 66-degree nights, they’d nearly doubled their amounts of brown fat, and were also burning a few more calories throughout their days. Keeping your home or office cool during the day may also have a similar effect.

A few studies have shown association between caffeine consumption, increased metabolic burn, and a reduced risk for type 2 diabetes. This could possibly be because it helps the body break down fat. But don’t go overboard: Too many caffeinated beverages a day can cause nervousness, nausea or insomnia. Plus, some coffee beverages are high in fat and sugar.

Even if stressful situations don’t cause you to binge on fatty foods, your body may take longer to process any calories that you do eat. In a study, women who reported being stressed out over a 24-hour span burned, on average, only 104 fewer calories after they ate a meal of eggs, sausage and biscuits.

The stress response activates the hormone cortisol, which has been clearly associated with a worsening of metabolism and, in the long-run, increasing the risk for obesity.

Not getting enough quality shuteye has also been shown to slow metabolism in both men and women; this also may have to do with the brain’s secretion of cortisol when the body is under stress. And even if you hit the hay early, that may not be enough. Research has shown that broken sleep (when you’re woken up frequently throughout the night) isn’t nearly as restorative as seven consecutive hours. So on top of crawling under the covers early; be sure to give yourself enough hours to get the rest and recovery your body needs.

Any type of physical activity — even just walking for 30 minutes — can help speed up metabolism. (Anything is better than sitting for hours, which is one of the worst things you can do.) But the kind of exercise that works best to activate brown fat and rev metabolism is strength training.

By increasing muscle mass, we can increase our resting energy expenditure, which is what’s going to help you burn calories all day long.

6. SNACK ON SOMETHING SPICY.

Capsacian, a molecule found in spicy chiles, has been shown to raise body temperature and speed up fat loss — although only temporarily, and only by a small percentage. There’s also some evidence that chemicals called isothiocyanates, which are present in pungent foods like spicy mustard, wasabi, and horseradish, may help activate brown fat and speed up metabolic rate.

7. POWER UP WITH PLYOMETRICS.

If you’ve been skimping on plyometric training, you might want to throw it back into your workout rotation. Why? All those squat jumps and burpees are by nature high-intensity, getting your heart rate up so you burn more calories in a short amount of time. Plus, when performed interval-style, you’ll rev your metabolism for the 24 to 48 hours after you leave the gym. According to one study, 12 weeks of HIIT plus plyometric exercise resulted in more lean body mass, reduced body fat and improved metabolic abnormalities compared to just HIIT alone. 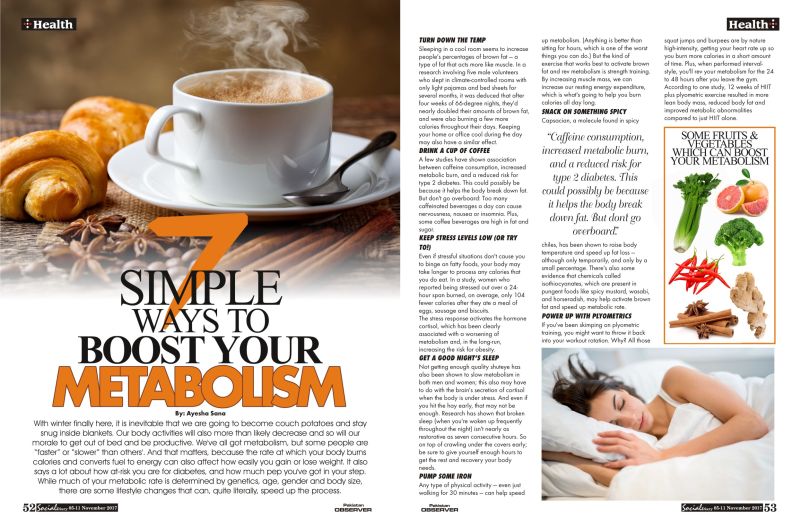 SKINCARE FOR GLOWING SKIN THIS AUTUMN

In Conversation with Zenith Irfan.

SKINCARE FOR GLOWING SKIN THIS AUTUMN