Because it’s a Family Time

This time, we took a special interview of much known showbiz celebrity Humayun Saeed, who is a good actor and lovable husband; here he shares the prized memories that he spent with his family…

Express the moment when you first met your partner?

I first met Samina at a common family friend’s house gathering. I was doing the first production of my life at that point. My partner whom I was working with in that production was actually not loyal to me, and Samina was the one to point it out to me. That’s when I realized how caring she was.

Tell us about your childhood?

I was a very shy kid. Actually, I am still shy but people find it hard to believe it. I was born and raised in Karachi  and received my education also from here.

Everyone knows that Humayun Saeed is one of the most popular chocolate heroes of our industry, so has your wife ever gotten jealous by watching you on-screen with beautiful actresses?

Initially she did, but no more now.

First and foremost, give them quality time and attention no matter how busy you are. No excuses for this. Learn to prioritize your life.

What is more beneficial for a happy life…Love or arranged marriage?

Honestly speaking, every marriage becomes the same after 5 to 6 years. It does not matter whether it was love or arranged. You just need to know how you want to take it forward. Mine was love marriage, and it has been successful but that does not mean I am against the arranged marriage.

Describe a typical family dinner. Did you all eat together as a family? Who did the cooking?

Yes, we all eat together. Samina used to cook, but now she has put together a great team of cooks. She has trained them well, and now she just oversees what’s being cooked.

What one your favorite foods?

What made you get into acting?

I didn’t plan on becoming an actor. It all happened by chance. I was working as a General Manager when I received a modeling offer which I decided to try out just for the sake of fun. However, when I started receiving various offers for acting, I decided to pursue a full time career in it.

What demands does your wife mostly have from you?

She asks to travel on all international trips with me.

How are you today different from what it was like when you were a child?

I was not that ambitious when I was a child, but I want to do everything now. I want to achieve greater heights and explore the world out there.

“I was not that ambitious when I was a child, but I want to do everything now.”

“I was a very shy kid. Actually, I am still shy but people find it hard to believe now….” 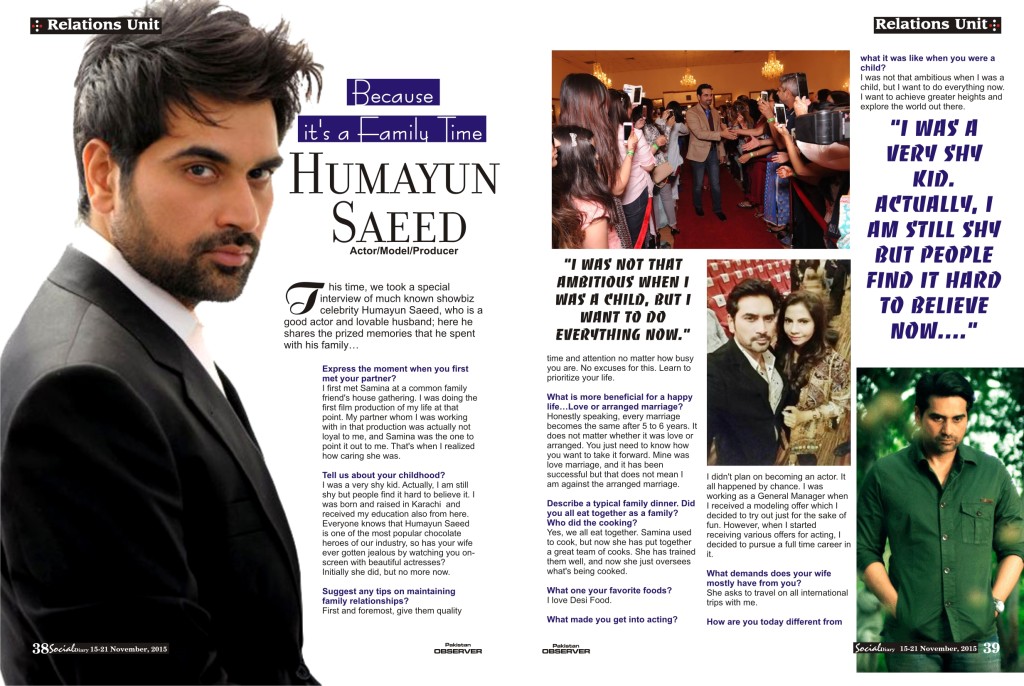 Things you didn’t know about HONEY…!

Things you didn’t know about HONEY…!