by admin
in Health Care
Reading Time: 2 mins read
0
Share on FacebookShare on TwitterShare on whatsapp

No one wants to sound like or sleep next to, a snorchestra.

In the simplest of definitions, snoring happens as a result of air being squeezed through a narrow or blocked airway. And the more you snore, the worse it gets. There is no such thing as snoring only — it’s a continuum. In fact, heavy snoring and sleep apnea may be linked to memory and thinking decline at an earlier age, according to a 2015 study published in Neurology. Since sufferers involuntarily stop breathing during the night, sleep apnea is a serious disorder that requires medical attention. But if you’re ready to put an end to “simple” snoring, try these five lifestyle changes for a more peaceful slumber.

Once you doze off, the muscles in your throat relax. Then, the walls of your “floppy” throat begin to vibrate as you breathe in and out and the narrower your airway, the more obnoxious the snore. In general, people who gain a few extra pounds will develop a little fat in the airway. The important dietary tip is avoid food at least three hours before bedtime because they can make the soft tissue more flaccid.

Sleep on your side:

“It’s simple gravity”. You snore more when you sleep on your back than your side because the base of the tongue and soft palate collapse into the back of your throat. Hugging a full-length body pillow may keep you (or your bed partner) snoozing the right way throughout the night. That’s because it can hold your back and belly.

Clearing your sinuses can have a huge impact on your nighttime breathing and believe it or not, 30% of people have year-round nasal cavity congestion. It is suggested by doctor’s to use a nasal spray before hitting the sheets.

As we get older, the tissues lining the throat become flaccid, especially if we are predisposed to sleep apnea. It is advised to patients with narrow airways to chew gum for 20 minutes a day, twice a day, in order to exercise the mouth, tongue, jaw and facial muscles. 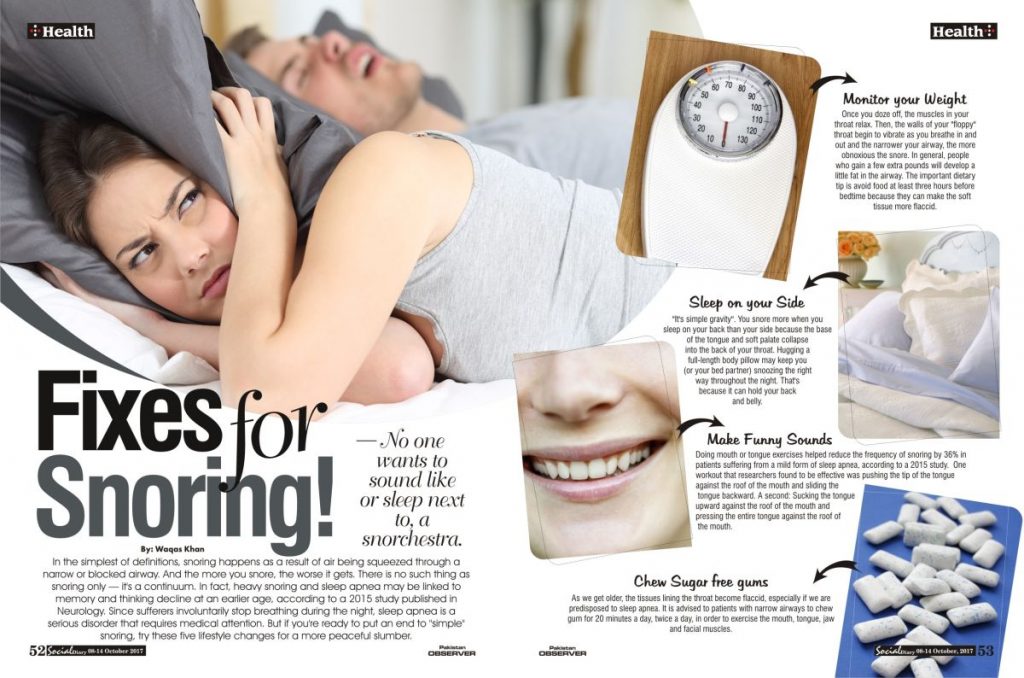 6 WAYS TO ADD GREEN TO YOUR HOME