by admin
in ChitChat, Gossips
Reading Time: 2 mins read
0
Share on FacebookShare on TwitterShare on whatsapp

42 year old Jemima Khan decided to knot with British artist Luke Janklow. She will announce soon the date of engagement. The couple was busy in shopping of marriage. Her first love was Imran Khan but they changed their ways.  During her marriage, her Jewish heritage was used by Imran Khan’s political opponents to question their credibility in Pakistani politics, especially concerning accusations that they supported the Jewish lobby. Imran  stayed alone for more 11 years striving for his political career, when he finally met Reham Khan during Dharna days in last days of 2014 and proposed her for marriage. The both marriage could not last long as just after 9 months and 22 days, both parted their ways with mutual consent.

Dilwale Trailer: SRK & Kajol are back to make you fall in love all over again!

Dilwale readies to release on December 18 and that seems a little too far now. But not that we can do much about it. Meanwhile, the team decides to give us a feel of what to expect from this year’s most awaited film and we were left with our mouth wide open. If Shah Rukh Khan and Kajol‘s daunting chemistry mesmerizes you, it is Varun Dhawan and Kriti Sanon’s spirited avatars that are making us go crazy. On top of it, there’s loads of Rohit Shetty masala that will blow your mind apart from some cars. We have already watched it several times on loop and just can’t get over it.

Saba Qamar love to do a film with SRK & Ranbir…

Pakistani model & actress Saba Qamar, who has been one of the most popular faces on television, is now ready to venture into Bollywood. Like Mahira Khan, Saba also aspires to make her debut opposite an A-lister like Shah Rukh Khan and has made it clear that she will only accept offers of A-grade projects. “I love Bollywood films and I would love to do a film opposite Shah Rukh Khan or Ranbir Kapoor. It should be A grade work,” she was quoted as saying. “I would love to do a film with Irrfan Khan too, he is a brilliant actor,” she added. She is currently working on an Indian project alongside actor Ahsan Kha, the Zee TV venture, ‘Mohabat Ki Akhri Kahani’, which is loosely based on popular Sindhi folklore Moomal Rano and will be penned by Zafar Miraj.

The female judges’ fashionable entrances have become a staple of The X Factor experience!

And Cheryl Fernandez-Versini didn’t fail to bring the glamour on recent results show. She looked sensational as she showed off her super slim figure in a gorgeous halter-neck gown in glittering gold by Parisian designer Stephane Rolland. Keeping her make-up and jewellery also simple, Cheryl added a few glittering flourishes, including a pair of hoop earrings and a thick bangle. 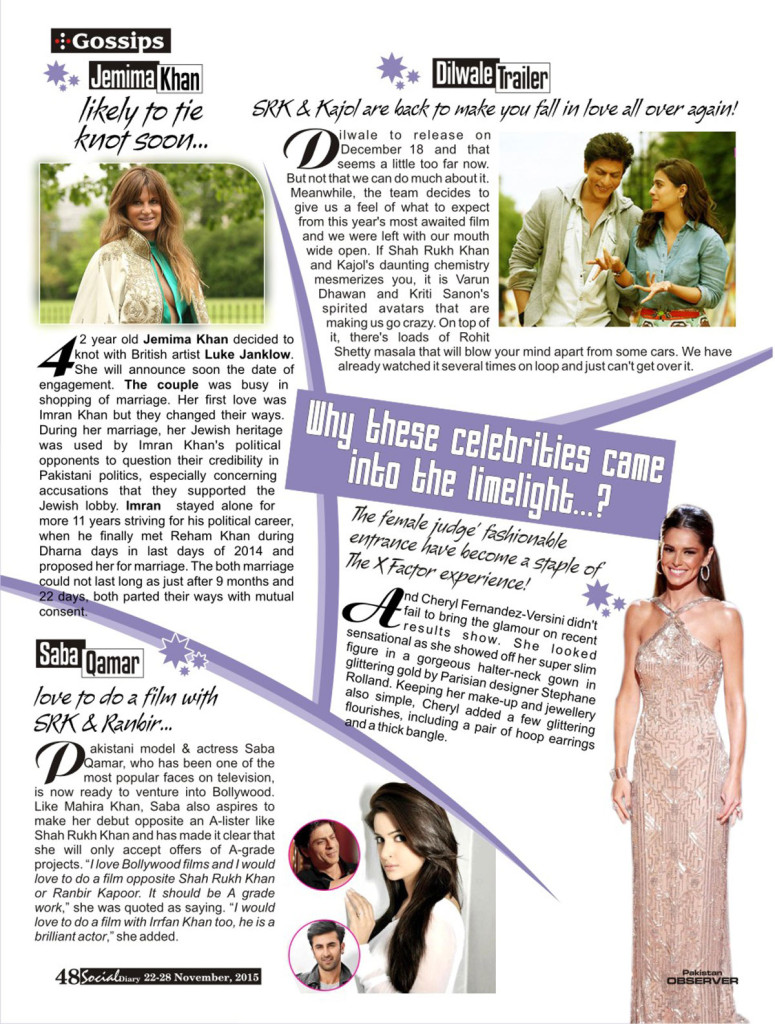 Fabulous Plants for a Winter Garden…

Fabulous Plants for a Winter Garden...