Some are blessed and others have to work extremely hard

One of television’s busiest actors today, Kubra Khan is known for her ability to effectively play both optimistic and positive characters and for her professionalism, dedication and commitment. Thanks to a hopeful outlook and her cheerful nature, Kubra continues to gain popularity in the industry as well as amongst Pakistani and international audiences like now in Bollywood also. In an exclusive interview, for the Pakistan Observer’s Sunday weekly Social Diary, she talks about her looks, acting, Pakistani & Indian cinema, the casting couch and her current projects.

How was the experience of working in Na Maloom Afraad as a joyful role?
My experience for ‘Na Maloom Afraad’ from start to the end was brilliant. Hina’s character and I shared some similarities so it was definitely a great way for me to debut.

Your working stints in every work simply just an amazing. So how this natural acting

comes out from you?
I personally don’t think I can act! However I do feel that I hold the skill to put myself in another’s shoes, which has helped me so far. Empathizing with my character really help me understand my roll over better.

Do you think training is important, or is a raw talent good enough?
Some are blessed and others have to work extremely hard. I feel those that work hard to get somewhere have the capabilities to break their threshold and achieve greater than they expect. Even if you have the raw talent, like they say “Practice makes it perfect”.

How was the experience of working in ‘Welcome to Karachi’ as a ‘character with grey shades’?
During the shoots, it was great.

Arshad Warsi and Jackky Bhagnani are so experienced actors in film industry. Were you 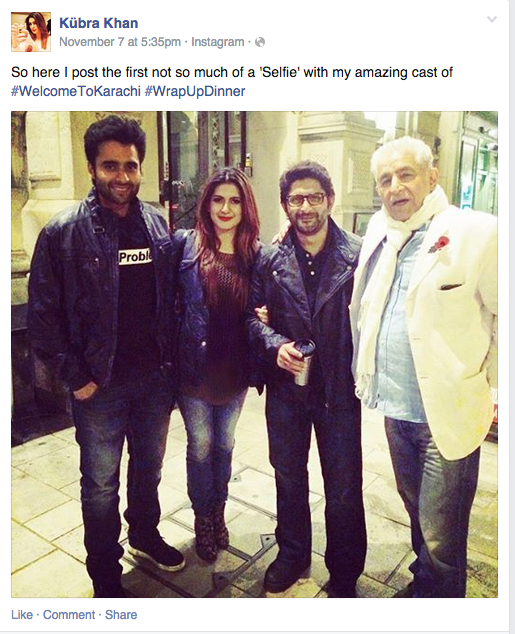 hesitant in working with them in your recent film?
Jackky and Arshad were both great help to me. Although Arshad was senior he was always extremely kind to me and helped me through several scenes.

As you are so polish in acting field and went to Bollywood also, so why don’t you go for Hollywood platform?
I believe I’m still learning. I haven’t yet thought about going to Hollywood, I’m planning to take life as it comes.

You have started your career from modeling first, then you came into acting, so which do you find will give you more support in achieving your goals?
Acting. Although I started modeling much earlier than acting, I feel like acting has taught me a lot more even about myself.

Writer whose script you like most?
In Pakistan I believe Fizza Ali Meerza and Nabeel Qureshi did an amazing job with ‘Na Maloom Afraad’ and no I’m not being biased! And India I absolutely Love Raj Kumar Hirani.

How many plays have been done by you?
As for now I haven’t done any plays, however I have few planned ahead.

If you weren’t the artist, what would you have been?
Architect or Formula 1 driver (If I could drive that is).

What are your leisure time activities?
I love photography and exploring cities, traveling, sketching, reading, baking and playing squash. Not to forget my PS4 – Yes the dude stuff!

Countries in which you have performed and just close to your heart?
I have worked in Dubai, it’s generally luxurious, but Korea is definitely close to my heart.

What is your family life like? Are there a lot of support for you and your goals? Plus with having a hectic schedule, do you cope up to spend your quality time with your family & friends?
My family is extremely supportive, the only reason I have made it as far as I have is due to them. I always take time out for family and close friends. I don’t think I’d be able to function without my family. I have a really small circle of friends, couple of people I have grown up with who have supported me through everything.

What makes you impatient?
I generally am a very patient person, a little too patient in the words of my friends. But when it comes to food, I get rather impatient.

Do you find it easy to memorize your lines?
Although it’s proven scientifically incorrect, I’m still going to say I have a memory of a Goldfish. Memorizing the lines is probably the hardest part.

How do you feel when your fans recognize you and want to talk to you or take your autograph?
At first I was really surprised, I have always lived grounded so to see people wanting my autograph or pictures with me was really overwhelming in all the right ways.

Most typically Pakistani thing about me?
No matter what part of the world I am in, I need to have Pakistani food at least twice a week.

Any celeb crushes?
Arjun Rampal in Bollywood! And Hollywood would be Chris Hemsworth.

Do you think there’s a pressure on you considering you’re interacting with so many different faces across the borders?
There is definitely a pressure, because everyone has different expectations from you and to meet those expectation keeping my principles intact can get tough at times but I have been getting through well so far so fingers crossed for the futures.

Your fans would love to know about your future plans and projects. What’s next for Kubra after acting?
Currently I am reading some scripts for plays and films. However, I need to finish my studies as well so I’m juggling between to two lives, but rest assured I will be seen a lot more often in the near future ( In’Sha’Allah).

If you have the raw talent, like they say “Practice makes it perfect”…

Jackky and Arshad were both great help to me. Although Arshad was senior he was always extremely kind to me and helped me through several scenes!

Wear Hijab with style & smile on your face

For the real SUNGLASSES lovers!

For the real SUNGLASSES lovers!